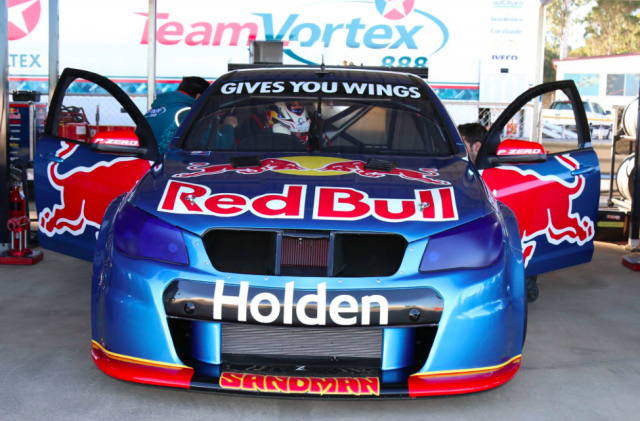 The Brisbane operation has been charged to help develop the 3.6 litre twin turbo power unit which will be adopted by the team for the 2019 Virgin Australia Supercars Championship.

Initially developed by General Motors’ racing division in Michigan, USA, the engine is now being vigorously tested in Australia having been fitted to Triple Eight’s modified Holden Sandman Supercar chassis.

Last Friday the engine conducted its first proper track test at Queensland Raceway having undergone 550km of running at the Norwell Motorplex on the Gold Coast. Kurt Kostecki behind the wheel of the Sandman pic: Matthew Paul Photography

So far the V6 turbo has run faultlessly during testing with the team impressed by its power, reliability and engine note.

While the engine is not expected to make its racing debut until next year via a series of wildcard outings, Dutton is pleased by the progress the team has made.

However, he admits there is still plenty of work yet to be completed.

“To be testing an engine that is not actually due for next year but the following year is a fantastic credit to everyone involved,” Dutton told Speedcafe.com.

“We are on schedule but there is always more we can do, and we will do that. It has been really positive.

“You constantly try and make some tweaks. There are various stages (of the development process) because it is such a change compared to the V8, so obviously we need to test lots of things.

“Even if you think it is in a sweet spot you still need to test a few variables and get miles on it as well.

“There are things we want to do on it, so we will definitely endeavour to (continue testing).”

The trio completed a series of long and short runs in an upgraded VF Commodore, usually campaigned by Eggleston Motorsport’s Paul Dumbrell.

Whincup posted a benchmark time in the car, which also acts as Triple Eight’s spare chassis, for the aspiring main game drivers to match.

Following a successful run, Dutton says the team will consider running a young driver evaluation day on a more regular basis to ensure it keeps abreast of the sport’s future talent. “It is something we will endeavour to do more often because it is good for us to know what (talent) is out there and for the young drivers to have the experience with us,” he added.

“We quite often get so caught up in everything else and all of a sudden two years have gone past since we last did a young driver evaluation because everything is so hectic.

“They all did a solid job. I haven’t had much of a chance to go through the data and review it with the engineers yet.

“I haven’t come to any conclusions but as far as applying their time they were all very consistent and comparable.

“They are good young men that didn’t put a foot wrong, I can’t complain really.”

Mayer joined the team in 2015 after moving from her native Germany following spells in Mercedes’ DTM and GT3 programs.

“For a first off she did a fantastic job,” said Dutton.

“It is good to do that because of course there are a few little things you can easily pickup and give constructive feedback too, which is great.

“It is very difficult to do that with a race engineer that is working week in week out.

“Having more people with the depth of knowledge to be able to run a car is beneficial.”