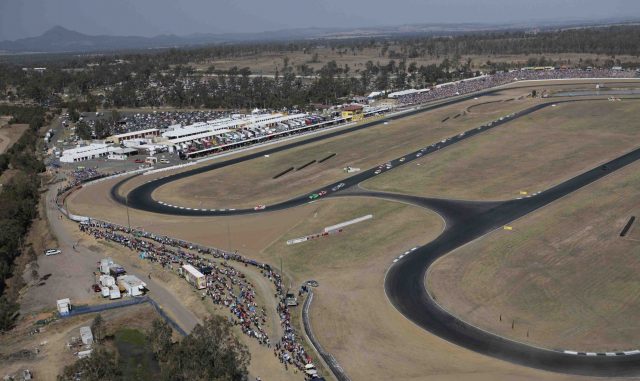 Queensland Raceway will feature on the Virgin Australia Supercars Championship calendar until at least the end of 2028 under a new deal announced today.

The contract was inked as part of a multi-million-dollar sponsorship deal with Ipswich City Council, and is contingent on long overdue upgrades to the facility.

Ipswich Acting Mayor Paul Tully and Supercars CEO James Warburton announced the agreement which will take Queensland Raceway to three full decades on the calendar, having debuted in 1999.

Ipswich City Council is currently planning a $52.3 million spend which would see the development of an Ipswich Motorsport Park, and Cr Tully said that the deal would help to spur on the work.

Plans for the development were revealed by council 12 months ago.

“Ipswich has a long-standing relationship with Supercars and will continue to do so as we embark on what will be the most significant redevelopment of a motorsport precinct in South East Asia,” he said.

“Plans call for a new extended track layout, Australian-first corporate facilities and vastly improved amenities for all patrons and new spectator areas all aim to elevate Ipswich to an improved standard for international motorsport events.

“This major national event also contributes to bringing a total of more than 250,000 motorsport fans to the park annually and knowing that Ipswich will remain on the Supercars calendar is a significant boost for our city’s growing tourism industry.”

Warburton hailed the agreement, while drawing attention to the importance of upgrades to the circuit.

“Ipswich is one of our biggest and most popular permanent circuit events which the region is incredibly passionate about, and proud of,” he declared.

“Our fans love us coming to Ipswich, but we also want to see the circuit improved for all motorsport categories who use the track 365 days a year, and better facilities for our fans.

“We and all of Australian motorsport look forward to critical safety and facilities upgrades to bring the circuit to FIA standards, as part of the circuit realising its overall master plan.

“This agreement is subject to these safety and facility upgrades proceeding to enable Supercars to continue competing at Queensland Raceway.”

Queensland Raceway has so far hosted 42 Supercars races across 20 events, including the 500km enduro from 1999 to 2002, in its first 18 years on the calendar, and is the test venue for teams based in the ‘Sunshine State’.

It will host the Coates Hire Ipswich Super Sprint this weekend (July 28-30).