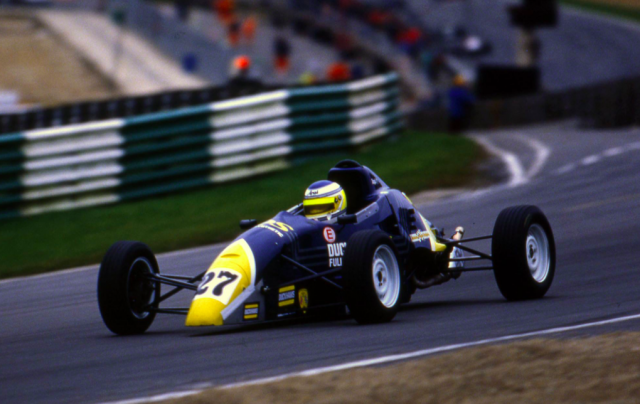 Russell Ingall on his way to victory at the 1993 Brands Hatch Formula Ford Festival pic:Gary Hawkins

The open-wheel formula has played a crucial role in nurturing aspiring drivers determined to make a name for themselves on the international stage since 1967.

Formula 1 hopefuls from across the globe flocked to England to compete in the British Formula Ford Championship which quickly became a crucial stepping stone on the motorsport ladder.

Over the last 50 years the series has unearthed a plethora of stars who have graduated to F1 and professional ranks, with three-time world champion Ayrton Senna arguably the most famous graduate. 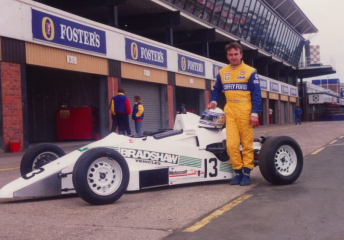 Ingall at Silverstone in 1991

The series also attracted its fair share of Australian hopefuls with Ingall among the most successful, finishing runner-up in 1991 before going on to claim a record breaking title triumph in 1993, alongside a coveted Formula Ford Festival win.

Ingall to this day holds the record for the most race wins in a single season after winning 13 of the 16 during his title year.

While Ingall’s F1 dream didn’t eventuate, the two-time Bathurst 1000 winner and 2005 Supercars champion is proud to have his Formula Ford achievements recognised.

“It’s pretty special to be named in the top 10, for sure,” Ingall told Speedcafe.com.

“If you look at the names on the list, there are guys that are now legend status in motorsport, so it’s nice, because here in this country, funnily enough I get very little acknowledgement from the establishment.

“The competition was unbelievable out there. To this day, Formula Ford is still the best racing I’ve ever done.

“People say, ‘You raced F3,’ you’ve been in the pinnacle of Supercars’. It’s still tough, it’s still hard, you still have to put in, but the racing’s nowhere near it as good.”

Ingall is one of three Australians to win the British Formula Ford title paving the way for Supercars drivers James Courtney and Scott Pye to follow in his footsteps in 2000 and 2010 respectively. 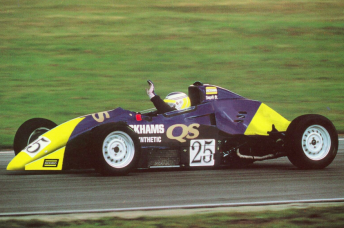 Ingall celebrates at Brands Hatch in 1991

His own Formula Ford journey was kickstarted by sweeping to the 1990 Australian Formula Ford Championship, which prompted Ingall to pack up his life down under and move to England to compete in the British series.

Armed with a friend to act as his mechanic, the pair set themselves up in a corner of the famous factory Van Diemen outfit near Snetterton, and set about running a privateer entry in the 1991 championship.

Ingall showed his class as he almost upset the factory team by running talented Belgian Marc Goossens close to the title only to fall short at the final round.

“I’d always intended to go to Europe anyway, to be honest,” he said.

“I decided to make the decision to do it, because it was a very closed shop in touring cars and I hadn’t finished with open-wheelers because I really enjoyed open-wheel racing.

“I had a couple of tests, I actually tested with Tony Longhurst, as that was part of the prize of winning the Driver to Europe Series and that was in a Sierra. After that test I thought, ‘I’m not driving these taxi cabs.’

“They weren’t a nice race car, so that’s what made the decision, and I basically sold up everything I owned.

“Ralph Firman, who owned Van Diemen at that stage, knew we were competitive and he knew we’d won the championship in Australia

“He didn’t think we were going to do much because, we were up against Marc Goossens with the Marlboro money. 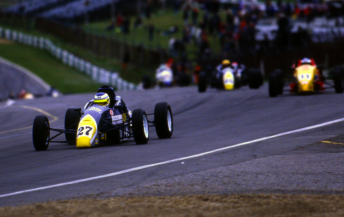 “He thought we were going to get wiped and all of a sudden, right from the first meeting, he was like ‘these Aussies, they actually go alright, they’ve got half a clue.’

“We were just doing it and the rest of the mechanics would pack up and go home and we’d still be working on the car at nights in the Van Diemen workshop, and we just pounded it, on and off the track, just worked hard at it.

“Out of that, we got a lot of respect, because my deals came later down the road and kept me in the game in Europe, considering basically I never paid for a drive in the whole series.”

Ingall’s performance earned him a deal in the German Formula 3 series in 1992, which resulted in a ninth place finish in the championship.

He was then offered a drive at the series’ factory Volkswagen team run by Bertram Schafer, but instead turned down the offer to race for Van Diemen in British Formula 3 with a brand new car.

However, this deal fell through leaving Ingall in the lurch, resulting in a move back to Formula Ford, funded by Firman in 1993.

The new Zetec powered Formula Ford car proved a perfect match allowing Ingall to power to the title, winning 13 of 16 races while also taking out the coveted Formula Ford Festival at Brands Hatch.

Ingall stormed to the title ahead of Brit and 2003 Le Mans 24 Hours winner Guy Smith.

“At that stage I had a year in F3 in Germany, so I was pretty honed, plus I think the fact that extra power suited the way I drove the car,” he added.

“Even though it didn’t have wings, the extra power of the thing I really enjoyed because you could throw it around.

“It probably prepared me alright for touring cars down the road because it was very low grip and a heap of horsepower, so they were cool things to drive.” 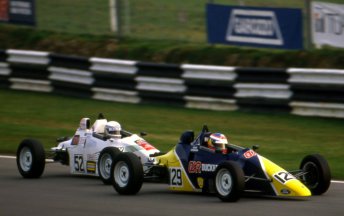 Looking back on his time in Formula Ford, Ingall singled out Goossens as his toughest competitor.

“I think Marc Goossens was pretty strong that first year, as a competitor, because he was savvy too,” he added.

“If you had that stamp on you, on your racesuit, you’re destined to F1, so he was very groomed but a fierce competitor too,

“He was a hard, tough racer and he knew how to play the game.

“He’s one, along with Tom Kristensen, that I’m surprised didn’t get to F1, because they were seriously fast drivers. Typical of anything in the land of Formula 1, some people make it, some don’t.”

Like so many hopefuls Ingall’s F1 dream petered out but single seaters’ loss was touring cars’ gain.

After a stint in Japanese F3 and the British Formula Renault Championship, he returned to Australia in 1995, where he teamed up with Larry Perkins to come from last to first in the Bathurst 1000.

The triumph earned him a seat at Perkins Engineering which was the start of a successful touring car career.

Although content with his achievements, Ingall believes he had the skills to make it in single seaters.

“If I won the German F3 championship, there might have been options of going to Formula 3000 and also DTM, which was super-strong, so possibilities might have been endless there, so that one call (to do British F3) changed the whole destiny,” he added.

“To this day I look at it. But at the end of the day I came back, won Bathurst, and then had a big career here, so it’s a (case of) one ball drops and you pick up another one.

“I was a better open-wheel driver than I was a touring car driver, in my opinion. Touring cars I did well with, because I knew how to race; I didn’t particularly like the cars, I didn’t like the handling.

“Here I got the ‘Enforcer’ tag because I came back and hit everything that I could that was moving, and I got chastised for it.

“I didn’t enjoy it that much because every time I raced hard, I ended up in the stewards office and it cost me money, or it cost me points, it cost me championships. Whereas in Europe, you could just go hard, it was proper racing.

“I felt in myself, as an open-wheel driver, I could have made it, I felt like I could have given Formula 1 a good nudge.