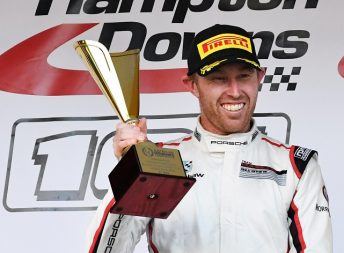 John Martin will make his return to the Australian Kart Championship in this weekend’s fourth round in Emerald.

Martin, who took a class victory in this year’s Bathurst 12 Hour aboard a Walkinshaw Porsche 911 GT3 R, will compete in the KA1 class at the Queensland venue.

The 33-year-old lives in Blackwater in Central Queensland, less than 30 minutes from the town of Emerald, which is hosting an AKC round for the first time.

“It’s a bit surreal really, to be able to race at the highest level of karting Australia without having to travel a minimum of eight hours is something I’ve never experienced before,” said Martin.

“Showcase the top level of karting to everyone in Central Queensland is going to be very exciting for everyone and I look forward to the local community getting behind it.”

The Walkinshaw Australian Endurance Championship driver believes that the meet is a boon for karting fans in Emerald.

“It was always hard to get people to understand that we weren’t racing ‘billy karts’ made in the back shed,” he explained.

“By having the championship come to Emerald it will really showcase how impressive the sport of karting really is.

“The speed is probably the one thing that is hard to grasp until you see the racing for yourself.

“We’ll have drivers as young as seven racing at in excess of 80km/h while the senior drivers will crack 140km/h; it’s super impressive and intense.”

Supercars drivers Nick Percat and James Golding will also be in action in Emerald, in the KZ2 class.

Round 4 of the Australian Kart Championship presented by Jayco and Castrol Edge takes place from today until Sunday.

Next Story Fife stretches KZ2 advantage in AKC Round 4