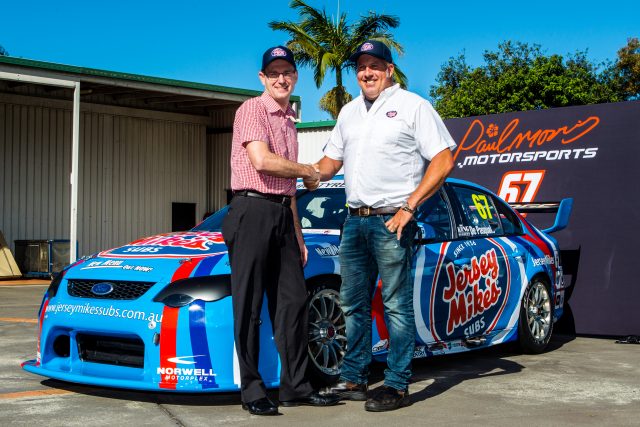 It is the first time the Queensland-based team has entered a car in the third tier V8 series with the idea designed to offer de Pasquale more seat time ahead of the continuation of his Dunlop Super2 campaign.

Regular PMM pilot de Pasquale currently sits fourth Dunlop Super2 Series after Round 4 of the seven-round series, having taken a breakthrough race and round win in Round 3 at Phillip Island.

The car is a Triple Eight-built FG Falcon which was run in Supercars by Dick Johnson Racing and campaigned by de Pasquale in the Dunlop Series last year.

Backer Jersey Mike’s Subs have more than 1500 outlets in America, but are new to the Australian market place with four stores now open in South-East Queensland.

While the company is using the region as a testing ground for their Australian menu before a proposed national expansion, it will also be testing the motorsport market with the Queensland Raceway appearance.

“Anton has been doing a solid job in the Dunlop Series, but you can never have enough seat time,” said Morris.

“We are delighted that we have the support of John Mackay and Jersey Mike’s Subs, who have made this possible.

“Jersey Mike’s Subs is a relatively new player to the Australian market, but I was first introduced to the product years ago in the States and know that their subs will smash it over here once fans get a taste of them.

“It would be great if we had a chance to grow together.

“This is a toe-in-the-water exercise for Jersey Mike’s Subs at this stage of our development, but if we were going to do something it made sense to do it at Queensland Raceway which is the ‘local’ track for all our stores,” said Mackay.

“I think the car looks great and we know that Paul and his team will do a solid job preparing it.

“We are happy to have Anton (de Pasquale) representing us out on track. He is talented young guy and will successfully put the Jersey Mike’s Subs brand in front of a growing customer base.”