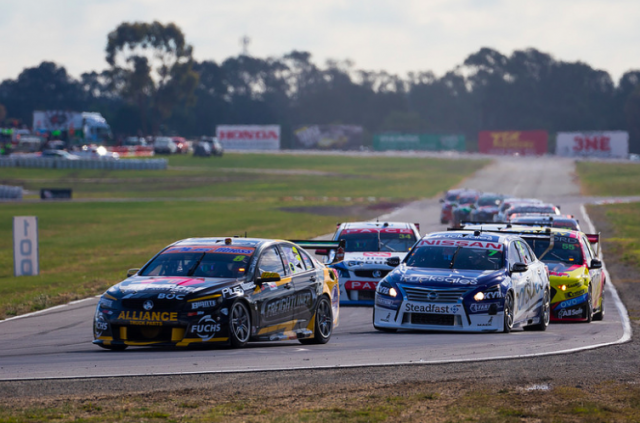 Supercars is closing in on securing its 2018 championship calendar which could feature an expansion to 16 events next season.

Set to be unveiled in September, the schedule is beginning to take shape with a move to add new events to the mix in full swing.

As previously reported, the Formula 1 Australian Grand Prix will become a full championship round for the first time with the meeting unlikely to be the only new championship event next year.

Moves to add a second South Australian round are becoming increasingly likely with the new Bend Motorsport Park circuit set to join the schedule subject to Tourism South Australia approval.

The $100 million state-of-the-art circuit, which is due to open in early 2018, has already received $3 million in government funding to help secure a Supercars race and has been tipped to land an August date slot.

The two additions may not be the only new championship events with Supercars continuing to work on securing an Asian round with interest already shown by Malaysia’s Sepang circuit.

A bid to support the Singapore Formula 1 Grand Prix has also been mooted.

“It will absolutely be 15 events and maybe 16 which will include Tailem Bend,” Supercars CEO James Warburton told Speedcafe.com.

“It depends on where things get to, there are 15 events, there are international events and there is Tailem Bend.

“In all honesty we have just got to work through it over the next couple of months.

“We are well and truly advanced with all the options and they will land or they won’t over the next weeks.”

Meanwhile, this week saw the latest piece of the puzzle fall into place following confirmation of a new deal between Supercars and Queensland Raceway.

Speedcafe.com understands the full details of a new long term deal are expected to be revealed by Ipswich Council later this month.

The Ipswich circuit was in the final year of its current arrangement which had left it at risk of missing out on the schedule.

With Queensland Raceway locked away, the focus shifts to Winton Motor Raceway with its future on the calendar yet to be secured.

The rural Victoria circuit penned a three-year deal last year although the arrangement is subject to securing funding.

Following assistance of the Victorian Government, Winton, which self promotes the Supercars event, enjoyed its most successful event in recent years in May.

Keen to stay on the calendar, the circuit is eager to secure government funding for the next two years, which will be known before the end of August.

“Winton had its best event it’s ever had and with the help of the Victorian Government we were able to deliver a profit for the first time in many years,” Benalla Auto Club chief executive Chris Lewis-Williams told Speedcafe.com.

“Off the back of that we are confident negotiations with government for the next two events will be successful.

“We are working with government now to secure ongoing funding because we have measured that the event delivers an economic benefit to the region.”

Also yet to secure its future on the calendar is New Zealand’s Pukekohe Raceway with reports in May revealing talks between Supercars to extend the cataract, which expires this year, were ongoing.

Changes to the Sydney Motorsport Park round have also been highlighted with Supercars working to turn the race into a possible non-championship ‘Big Bash’ style event under lights.

Work is well underway on the project which aims to boost crowds having struggled to attract spectators to the Western Sydney track in recent years.

Like Sydney Motorsport Park, Phillip Island faces a continual struggle to attract numbers, although the venue is set to remain on the bill as it enters into the final year of its current long-term deal next season.

Circuit managing director Fergus Cameron is hoping a new agreement can be reached with Supercars for beyond 2018.

“We’ve got a really good working relationship with Supercars and we have got a contract until 2018 and we are very positive about moving forward from there,” Cameron told Speedcafe.com.

“We do value the tradition of having events come back year after year and it is an important factor in seeing them grow and mature.

“Generally I think there is lots of room for growth with the Supercars event and I think they are aware of that as well.”