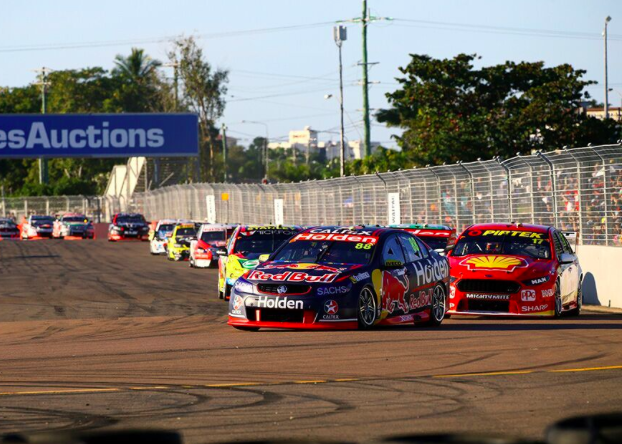 A sustained threat from DJR Team Penske is pushing Triple Eight to new heights according to team owner Roland Dane.

Triple Eight is facing its most serious title challenge in recent times following an impressive start to the season from the Shell backed Fords, who have won eight of the 14 races so far.

While the Brisbane team has faced challenges from Prodrive, most notably in 2015, Dane feels the performance shown by DJRTP is the toughest his operation has encountered.

The strength of the opposition has forced Triple Eight to up its game which was evident on Sunday when Jamie Whincup managed to defeat DJRTP’s Scott McLaughlin to score a breakthrough win.

“Competition makes everyone better, and if we’d stayed at the same level we’d just be beaten,” Dane told Speedcafe.com when asked if he thought DJRTP was pushing his team to new levels.

“Look, Prodrive beat us in 2015 when Jamie (Whincup) was having a little bit of an off year, as it were, after so many years of fighting for it.

“They’ve (Prodrive) won races each season but they’ve never really provided the same consistent opposition as these guys (DJRTP) are.

“We’ve done a lot of work recently, it’s an incredible workload we’ve got through to keep the cars competitive as well. It’s a big thing.

“People outside the team really have no idea about how hard everyone works.

“Hopefully it’s a big year, a big fight and the enduros are going to be very meaningful. I’m really happy with our driver line-up.”

Relieved to record his first win of the season on Sunday, Whincup says Triple Eight is closing the gap but admits DJRTP still holds the car speed advantage.

“We’re there when they make a small error, we’re there to pounce. They’ve still got the quickest cars.

“We’re not happy about that. We’ll strive and make sure our cars are the quickest out there.”

Whincup is six points adrift of McLaughlin in the drivers’ standings while Triple Eight is 114 points shy in the teams’ championship.