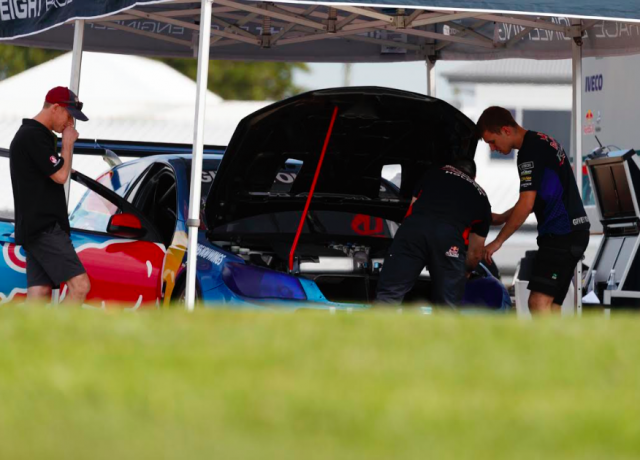 Craig Lowndes is confident the new V6 turbo engine will prove a competitive engine in Supercars once development work is completed.

Triple Eight has been busily developing the new 3.6 litre V6 turbo engine which is set to be debuted via a series of wildcard outings next season, ahead of a full 2019 rollout.

The Brisbane-based squad conducted its first track test of the General Motors engine at the Norwell Motorplex on the Gold Coast last month.

Lowndes was joined by his Pirtek Enduro Cup driver Steven Richards and six-time Supercars champion Jamie Whincup to log valuable test miles on the engine, which was fitted to the team’s Supercar-based Holden Sandman chassis.

After completing 400km of faultless running Lowndes believes the engine has potential compared to the existing V8 power plants.

He admits the team has a lot of work ahead before the engine is ready to be raced.

“We’re getting through it (the workload), and I think the good thing about it is when we ran the V6, it ran without a problem so that was a good thing,” said Lowndes on Fox Sports’ Inside Supercars.

“It was great to see and feel the car run, I think that it was a credit to the team.

“There’s still I think a lot of work to get to a point where we’ll actually race with it, but it’s a credit that it ran pretty much faultlessly.

“It would have been a real headache if it had issues but it ran really well, so for us on that point it’s really a credit for Roland (Dane) and the team to be able to do that.

“It was nice to be the first to drive it. It’ll be a competitive engine. Once we get it into a race car and then finally see what it’s like on a track, head-to-head with a V8, it’ll be interesting. I think it’s got great potential.”

Lowndes also confirmed the engine does have a distinctive note compared to the current V8 units.

Triple Eight is expected to release a sound clip of the new engine next week.

“It sounds very different inside the car than what it sounds outside the car,” Lowndes added.

“I was the first to drive it and sort of debug it, and then Jamie drove, and when you get somebody else to drive it and you hear it from the outside, it is definitely a different noise.

“It has a sound. I was sceptical, too; as soon as you put a hair dryer (turbo) on anything, it definitely quietens it down, but it’s actually got a good note, so that’s going to be exciting.”