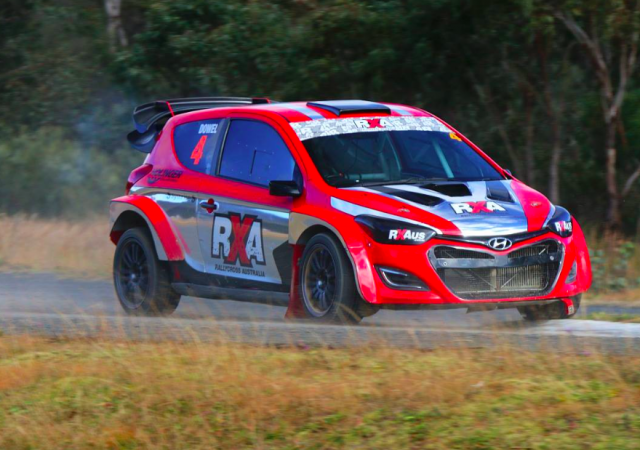 A field of more than 30 cars has been confirmed for the inaugural rallycross event at Winton this weekend.

The country Victoria circuit will host the fourth round of the RX Aus Australian Rallycross Championship on a newly constructed rallycross layout.

Organisers have received 31 entries for the two day event which will feature nine 4WD class entries alongside a 17 car 2WD field and five Excel Cup cars.

The field will do battle on a newly built eight turn 1.3km circuit, which utilises the ‘old’ start-finish line and running through the pair of right-hand corners before veering onto the infield.

The circuit is expected to be the fastest on the calendar with multiple overtaking opportunities including a dirt ‘joker lap’ section.

Justin Dowel headlines the field in his 4WD class leading Hyundai i20 although just 10 points separate him from nearest rival Will Orders (Mitsubishi Lancer EVO) following his victory at Carnell Raceway in Queensland.

The pair are likely to face competition from round two winner Steve Glenney in his Techsport Mitsubishi Lancer EVO.

Dowel’s son, Troy, will compete in both the 4WD and 2WD classes piloting a Volkswagen Polo and a Ford Fiesta respectively.

Troy Dowel has recently returned home from another stint at the RX Academy in Finland.

Also returning to the series will be teenage rising star Sean Bolger, whose VW Polo will sport brand new sponsorship from Darrell-Lea Stix this weekend.

Bolger missed the two most recent rounds of the series while awaiting engine parts for his Polo from overseas, but with the car sorted the Queensland teenager is expected to race at the pointy-end as he did at round one.

The 17-strong 2WD grid will see the field split into at least two groups.

The top four in the RXAus 2WD championship are all confirmed starters, including points leader Mike Conway (Ford Mk2 Escort)

Arron Windus, who is third in the championship, returns in the Mazda 2, while Scott Anderson has upgraded his VW Polo with more power to suit Winton’s expected high-speed layout.

The 2WD entry includes a host of newcomers, including plenty of Australian-built muscle in the form of several Holden Commodores, both in sedan and ute form, and a Ford Falcon.