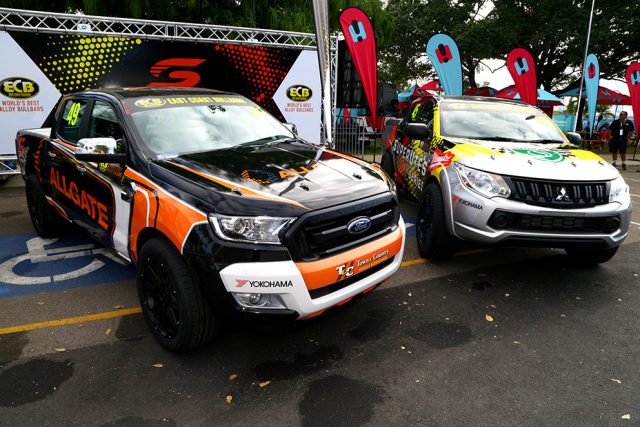 The two prototypes which were unveiled at Townsville

Leading V8 Utes competitors are adopting a wait-and-see approach to the new SuperUtes category after the first two prototypes were officially unveiled at the Watpac Townsville 400.

V8 Utes stalwart Kim Jane and 2006 series winner Marcus Zukanovic are both looking forward to on-track testing before deciding whether or not to enter SuperUtes. 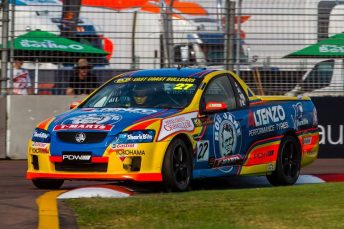 Jane chose to enter the Toyota 86 Racing Series at the suggestion of sponsor SharkBite, after scepticism at the initial timeline which would have seen SuperUtes debut as a series in Townsville, but has continued in his VE Commodore due to the V8 sedan-based formula’s stay of execution.

However, the launch of the new platform, about which existing V8 Utes competitors were briefed that weekend, has prompted the veteran racer to consider his options.

“We’ve actually got a car that people can see and they’ve got a basic set of regs out, so you can start to see what it’s to be like next year,” Jane told Speedcafe.com.

“They’re going to be less horsepower than these (V8 Utes) but if it’s competitive, it doesn’t really matter.

“It depends on what they’re like to drive; if they’re horrible and you can’t get them to turn, you’re probably going to think twice about it, but they haven’t tested them yet on the track.”

Zukanovic returned to the category in last year’s Sydney Olympic Park finale, but the former Commodore Cup and Dunlop Super2 Series driver is sceptical about racing a turbo diesel powerplant. The interior of the Mitsubishi Triton SuperUte

“All I’ve driven is V8s my whole life and to go to a turbo diesel doesn’t sound appealing,” he told Speedcafe.com.

“Hopefully, if they start doing some on-track testing soon enough, and they start performing, it might be a different mindset.

Jane, who debuted in V8 Utes in 2003, also emphasised the significance of attaining manufacturer support in determining whether or not to take up the new platform.

“You’d really hope to get support from a manufacturer, or a dealership group,” he added.

“When we originally built these (V8 Utes), the cars were $36,000 because Holden did us a deal, and it was basically another $35,000 to James Brock (to convert to race specification).

“Is it essential? Probably not, but it’d be nice to be given a car in the first place.”

The Sieders Racing Team, which won last year’s V8 Ute Racing Series with David Sieders, was the first to commit to the new formula and is planning to field at least a Mitsubishi Triton for Craig Dontas.

Team owner Luke Sieders also confirmed to Speedcafe.com that it will again field former V8 Utes competitor Ben Dunn as a customer, with the long-time Falcon driver set to campaign a Ford Ranger. 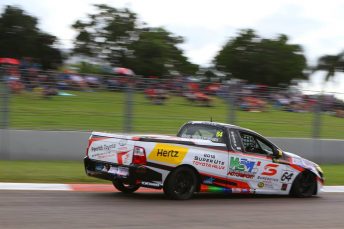 Western Sydney Motorsport, which debuted in V8 Utes just last year, has also confirmed that it will enter at least one Hilux for Craig Woods with dealer support from Penrith Toyota.

“Because we’re in the Utes space now, and Craig Woods’ sponsorship is tied in with the local Toyota dealership that we have in our area, it was just a natural progression for us to stay committed to the evolution of the utes so that’s why we’ve got involved with the Hilux,” explained team owner Craig Thompson to Speedcafe.com.

The team’s sponsorship comes through Thompson’s connections as a Hertz franchise owner.

Jane and Thompson both expressed their approval at the appointment of Ross Stone, who will campaign three Rangers in the new series, as an advisor to Supercars for the development of the platform.

“With the introduction of Ross Stone into the planning of the category, we know that we’ve got the best knowledge that we could possibly have in the series,” said Thompson.

“The ideas and the changes that he’s going to implement are only going to make the ute a much better racing package.”

Three-time V8 Utes champion Ryal Harris announced in Townsvile that we will race a Mazda BT-50 out of Peters Motorsport, while Prodrive Racing Australia has strongly flagged the possibility of participating in some capacity.

In addition to the Ranger, BT-50, Triton, and Hilux, the Holden Colorado and Isuzu D-Max are also set down for homologation for racing next year.