POLL: Who is the Supercars title favourite? 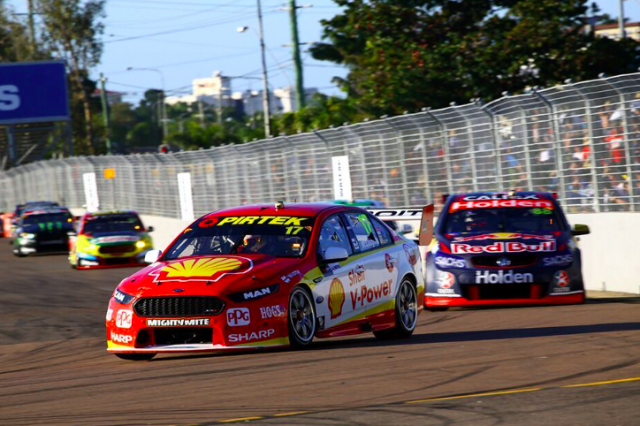 The Watpac Townsville 400 provided a significant shift in the Virgin Australia Supercars Championship title race as the season hit the halfway mark.

An eventful pair of 200km races at the Reid Park circuit has provided a new championship leader with DJR Team Penske’s Scott McLaughlin taking over the mantle from team-mate Fabian Coulthard.

A dominant weekend from McLaughlin has seen him open up a six point lead over Red Bull’s Jamie Whincup, while Coulthard saw a 10 point advantage turn into 158 point deficit as he dropped to third following a horror weekend.

McLaughlin is enjoying the best run of form of his Supercars career having finished inside the top five in the last eight races, with five of those victories.

This has been aided by a series of supreme performances in qualifying, clocking up 12 consecutive front row starts and nine pole positions.

The run continued in Townsville as McLaughlin’s talent and Shell Ford combined to score back-to-back poles which he converted to a victory and a second place finish, marking him as the form driver.

However, Whincup has stayed in touch with McLaughlin during this period providing a worthy title challenge, which received a timely boost after a drought breaking win on Sunday.

The triumph saw the six-time champion record his first win since December last year, but the 34-year-old has scored eight podiums this season prior to Sunday’s win.

Whincup has been a model of consistency, crucial for championship bids, having finished 13 of the 14 races inside the top six.

Although, he and the Triple Eight team openly admit they have work ahead to close the gap and match DJRTP on a regular basis.

Meanwhile, Coulthard’s title bid suffered a dent following his worst weekend of the season to date, although he remains right in the mix with seven events remaining, including the Pirtek Enduro Cup.

The New Zealander surrendered the championship lead, he has held since taking victory in Race 5, after being caught up in a opening lap crash at Townsville, which saw him forced to battle back from last to 10th spot.

Matters were made worse on Sunday when he suffered a 15 second time penalty for spinning out Tim Slade dropping him to 21st position.

Reigning series champion Shane van Gisbergen is 231 points back in fourth as he continues to recover from a costly DNF at Darwin.

After blitzing the Adelaide season opener, van Gisbergen has been unable to match the consistency of McLaughlin, Whincup and Coulthard, having been hampered by set-up imbalances.

Despite this the Kiwi has sharpened his form by delivering three podiums from the last five races including a victory at Winton in May.

While it appears unlikely the top four will be threatened, Prodrive’s Chaz Mostert and Mark Winterbottom cannot be ruled out just yet as they sit fifth and sixth currently, 351 and 435 points adrift respectively.

Mostert is the only driver outside of Triple Eight and DJRTP to score a race win this season, while Winterbottom’s campaign is growing after a third and a fourth at Townsville this weekend.

Prodrive showed clear signs of improvement at Townsville but it remains to be seen if they can mount a serious threat.

Who do you think will win the Supercars title?