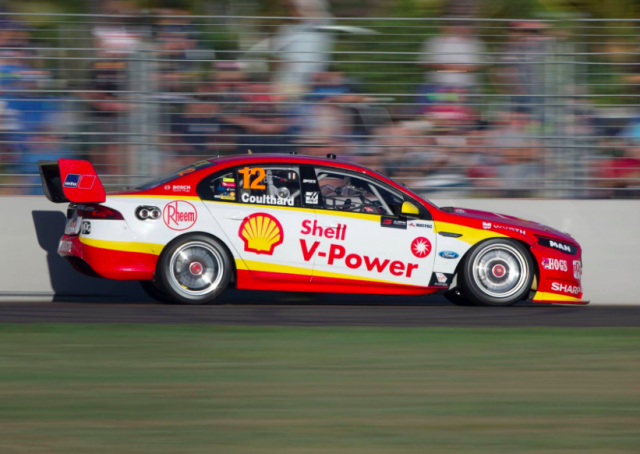 Fabian Coulthard says his Watpac Townsville 400 weekend was ‘one to forget’ after two eventful races dented his championship aspirations.

The DJR Team Penske driver headed to Townsville holding a 10 point series lead over team-mate Scott McLaughlin, but has now dropped 158 points adrift in third after the two 200km heats at Reid Park.

Coulthard struggled to match the pace of his team-mate throughout the weekend which ultimately left him ninth and 12th on the grid for the two races.

The Kiwi was an innocent victim of a multiple car crash on the opening lap of Saturday’s race which saw him lucky to avoid retirement.

After fighting back to 10th in Race 13, his Sunday came unstuck firstly by missing out on the Top 10 Shootout.

However, a 15 second time penalty for turning around Brad Jones Racing’s Tim Slade at the final corner, early in the running, left him mired at the rear of the field, coming home in 21st position.

“The weekend is one to forget, that’s for sure, but my guys tried their best but they couldn’t get on top of the car, so it was a great weekend for Scotty; a first, a second, two poles, so dream run for those guys,” said Coulthard on the television broadcast after declining to be interviewed post race by Speedcafe.com.

“We have a little bit of work to do; we’ll go back to the drawing board, have a look at a few things, and see if we can come back stronger at the next one.

“I’ve been in other teams and I’ve been in far worse positions than what I am at the moment, so by any means our season’s not bad.

“We just had a bit of a blip in the radar so hopefully we can bounce back at the next one, stronger, faster, better, and get back on the podium.”

The 24-year-old was locked in a fight with eventual Race 14 winner Jamie Whincup throughout Sunday’s contest despite suffering a coolsuit failure.

McLaughlin admitted he didn’t quite have the edge on Whincup in the final stages of the race to launch a serious challenge for the win.

“I didn’t want to chew up the rear tyres and whatever so I just relaxed and got into a groove,” said McLaughlin.

“I had a little push in the end but didn’t have much for it so you can always have a crack but at the end of the day you’ve got to take the seconds when you can, like he has been doing.”