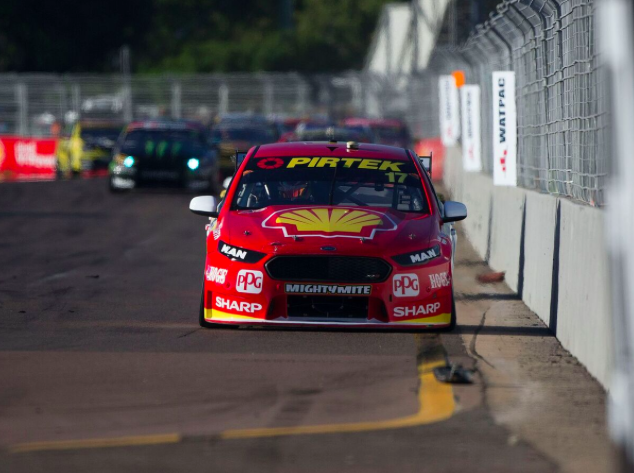 Scott McLaughlin was unstoppable as he surged to an Armor All provisional pole position for Race 14 of the Watpac Townsville 400.

The DJR Team Penske driver proved the man to beat as he posted a 1:12.03s effort which was more than two tenths of a second faster than his nearest rival.

In a repeat of his Saturday qualifying display the Kiwi was able to climb out of the car with three minutes of the session remaining.

“It’s really nice to drive a car this good and it sort of repays you driving to its limit,” said McLaughlin.

“It’s a lot of fun around here, especially a street circuit, but I’m a lucky boy, I’m just counting my lucky stars to be able to drive a car this good.

“We’ve got to work on a few things but it’s nice, so I’m just stoked to be in the Shootout again.”

Prodrive continued its resurgence with all four cars inside the Top 10.

Chaz Mostert led the charge as he climbed to second, 0.26s shy of McLaughlin.

Mark Winterbottom put his Ford into third while team-mates Cameron Waters and Jason Bright were seventh and eighth.

Erebus Motorsport’s David Reynolds impressed as he emerged as the top Holden in fourth, ahead of the Red Bull Commodores of Jamie Whincup and Shane Van Gisbergen.

The two Triple Eight drivers were forced to dig deep to claim a spot in the all important shootout.

Nissan’s Michael Caruso narrowly missed out in 11th position ahead of DJRTP’s Fabian Coulthard, who couldn’t match the pace of his team-mate McLaughlin.

“We just can’t get on top of the quali car here this weekend,” said Coulthard.

“Scotty’s got it nailed, two from two, so like I said yesterday we’ve got a lot of work to do in the quali sense but we won’t give up.

“For me I’m just struggling to get the car rotated. Every time you wait for the car to rotate, you can’t get on the throttle, so that’s time for nothing, but we’ve thrown a few things at it this weekend to try and improve it and make it better.

“Unfortunately my guys on the 12, we haven’t been able to manage it.”

Craig Lowndes was another notable absentee from the top 10 as his qualifying woes continued down in 21st position.

“We’ve just got to try and activate the tyre, that’s our biggest drama,” said Lowndes.

“We had a good run through Darwin, we thought we’d come here and got sort of 90 percent of it right, but we’re struggling in qualifying, so we’ll just race on like we did yesterday and see if we can get some good points.”