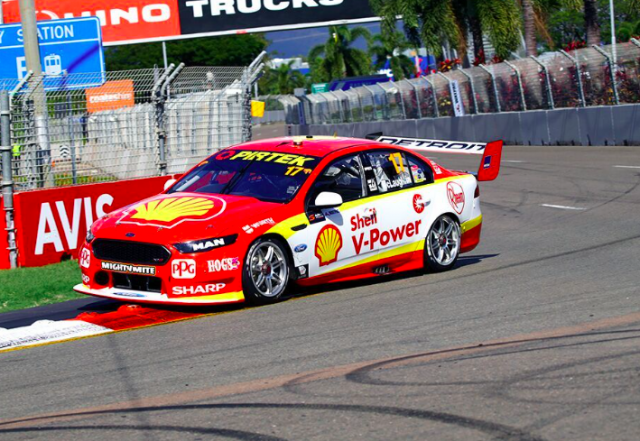 Scott McLaughlin produced the fastest ever Supercar lap at Townsville’s Reid Park Circuit to claim the Armor All pole position for Race 14.

The DJR Team Penske driver blitzed his shootout lap to post a stunning 1:11.99s effort to secure his ninth pole position of the season and his 12th consecutive front row start.

McLaughlin once again enjoyed a relatively comfortable 0.26s margin over his nearest rival, which in this case was Shane van Gisbergen in the #97 Red Bull Holden.

“I’m stoked. I’ve been trying to get an 1:11s lap all weekend, so to get it in the Shootout is fantastic,” said McLaughlin.

“Shane (van Gisbergen) did a really good lap there, a 12.2s, and I just knew I had to get it right there, it was fantastic.

“I’m living the dream at the moment. I’m very lucky to have the car underneath me and I’ll never take that for granted so I’m 24-years-old and I’m just trying to make the most of it.”

Van Gisbergen emerged as the top Red Bull Holden benefitting from what he described as a ‘big swing’ in changes from this morning’s qualifying session.

“The boys did an awesome job fixing my car up after yesterday’s problem, and it was apretty good improvement from qualifying, too,” said van Gisbergen.

“The car was awesome, but that’s a big gap, two-and-a-half tenths to Scotty.”

The effort was just 0.02s quicker than David Reynolds who produced another impressive display in the Erebus Motorsport Holden.

Reynolds fired in a stunning first sector but a slide coming out of Turn 12 cost him valuable fragments of seconds.

“It was a shame about the rest of the lap.”

It was however enough to jump Jamie Whincup who ended up fourth in the #88 Red Bull Commodore, 0.3s shy of McLaughlin.

Mark Winterbottom was fifth fastest and the first of four Prodrive Falcons, but he felt a brake drama at Turn 1 hampered him on his lap.

He will share the third row with team-mate Chaz Mostert.

Nissan Motorsport’s Rick Kelly will line up in seventh alongside Cameron Waters (Prodrive), while Garth Tander (Garry Rogers Motorsport) made the most of his used tyres to claim ninth.

Jason Bright completed the top 10 following a costly error on his shootout out lap.

The Mega Fuels backed driver locked the rear wheels of his Falcon, which resulted in a spin at the final corner.