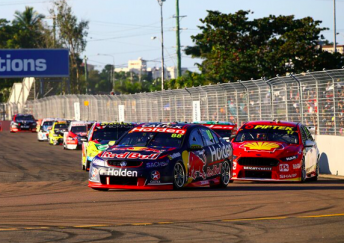 Triple Eight team manager Mark Dutton says there is no miracle fix in catching DJR Team Penske but believes his squad is slowly but surely reeling in the Ford outfit.

The Holden operation was once again left to follow in the wake of a Shell Ford as McLaughlin converted a pole position into a comfortable win in Saturday’s opening heat at the Watpac Townsville 400.

Six-time champion Jamie Whincup led the charge by qualifying second, 0.2s adrift of McLaughlin and led the race for a fleeting moment, before finishing 4.1s adrift at the chequered flag.

As McLaughlin continued his sparkling form, the sister car of Fabian Coulthard struggled to match his team-mate’s pace in qualifying trim.

While not satisfied until the gap to DJRTP is closed, Dutton is however encouraged that progress is being made, albeit small increments.

“We made some ground in qualifying I think. They were clearly three tenths up in Darwin and Winton,” Dutton told Speedcafe.com.

“Now, the gap was just two tenths in Townsville, then that’s a tenth better. You’ve got to chip away. As silly as it sounds, that’s what you have to do.

“There’s no miracle fix, it’s just working away and trying to improve. They’re really in a sweet spot now on the one car.

“We’re not satisfied with that but you’re happy to make an improvement. If you’re going forward that’s always positive.

“They’re not lightning quick compared to everything else in the field, which we knew, but it’s also very good when it’s shown that they’re not infallible.”

This year Triple Eight finds itself with an increasing workload as it juggles an intense title fight with DJRTP alongside the development of the new Gen2 Commodore and V6 turbo engine.

Dutton admits the Gen2 project is time consuming but isn’t taking away resources from its championship battle.

“Yes, it is taking time and things like like that. It is a heavier toll on people, it’s just people are more tired and more time at the workshop and less time with friends and family.”

While Whincup led the fight against DJRTP, it proved a challenging day for the other side of the Red Bull garage as reigning champion Shane van Gisbergen suffered an uncharacteristic engine issue.

The Kiwi encountered a drop in power which became progressively worse in the closing stages of the race, dropping him from fourth to seventh at the chequered flag.

Van Gisbergen’s #97 was set to undergo an engine change overnight to fix the mystery issue.

“Touch wood we haven’t had many engine dramas ever,” said Dutton.

“You can count on one hand the engine dramas we’ve had in the last 15 years.

“It’s very uncharacteristic, so we’ll obviously have a really good look and try and understand what’s happened because it’s not normal.”

The Supercars field returns to the track today for another 200km race.