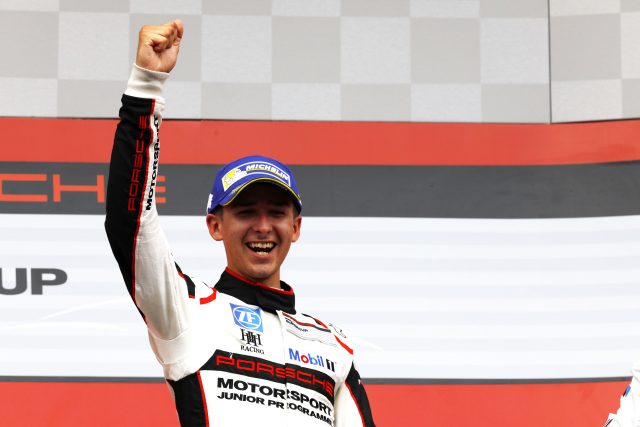 Campbell celebrates on the top step in Austria

It was the first win by an Australian in the Supercup since Alex Davison’s victory at the Indianapolis Motor Speedway in 2002.

The defending Carrera Cup Australia champion and Porsche Junior Scholarship Programme holder, dominated the race from the opening lap after a perfect exit to Turn 1 allowed him to open up an early 0.4-sec gap. 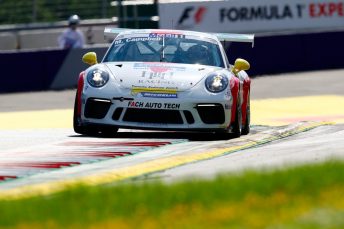 Campbell controlled the race from the outset

Cheered on by fellow Aussie legend Mark Webber from his pit box, Campbell continue to extend his lead and was more than a second in the lead by the end of the fourth lap.

He settled down in mid-race to maintain a comfortable lead and then got back on the gas to extend his lead to 2.6-sec when English driver Mark Radcliffe beached his car to bring out a safety car on the 14th of the scheduled 16-lap journey.

Radcliffe’s car was quickly craned from the trap which allowed a one-lap dash to the chequered flag.

The Queenslander paced the field into the final lap and then accelerated away to win the race from championship leader Michael Ammermuller and Luxemborg’s Dylan Periera.

“I’m really happy. If I’m honest, I was a little relieved when I crossed the finish line. When you start from pole position you want to win. I managed to do this and I’m thrilled,” said Campbell.

The victory was even a little more special for Campbell with his mum Angela, aunt Teresa and grandmother Sharon watching on from the stands.