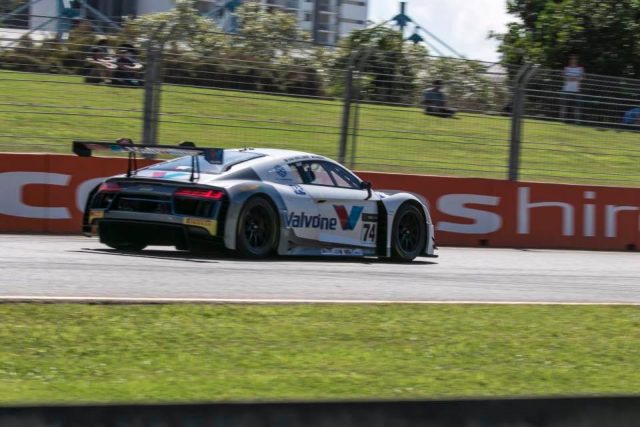 Kelvin van der Linde has earned pole position for Round 4 of the Australian GT Championship in Townsville despite being punished for passing under yellow flags.

Van der Linde was fastest in Qualifying 1, but came under investigation post-session for passing under yellows on the session’s out-lap.

The Audi factory driver was found to be in breach and stripped of his two fastest laps as a result, but his next two were still good enough to put him faster than Ash Walsh.

As a result, the #74 Jamec Pem Audi R8 of van der Linde/Geoff Emery will start on the inside of the front row for this afternoon’s Race 1, alongside the #44 Supabarn Audi R8 of Walsh/Duvashen Padayachee.

“Obviously we’ve had a good car the whole weekend; I seemed to get up to speed quite quickly yesterday,” said van der Linde.

“(It was a) Difficult qualifying session, there was a bit of confusion in the beginning.

“Going out of the pit lane I passed Roger (Lago), there were no yellow flags on track, and then obviously yellow flags came out after about Turn 3.

“I followed Liam (Talbot) around and he seemed to have a problem with his car actually; he was going really, really slow.

“I got a call (on the radio) that said, ‘Look he’s going slow, there must be something wrong,’ so to go for it so I could get a clear lap, that’s what I did and it seemed to pay off.”

Glen Wood improved on his early effort during Qualifying 2 in the #48 M Motorsport Lamborghini R-EX, but not enough to advance his provisional starting berth of third position.

Championship leader Liam Talbot moved up from last to ninth after the #911 Walkinshaw Porsche 911 GT3-R had a throttle body problem in Qualifying 1.

Steven Richards/James Bergmuller will start from 10th in the #100 Laser Plumbing BMW M6.