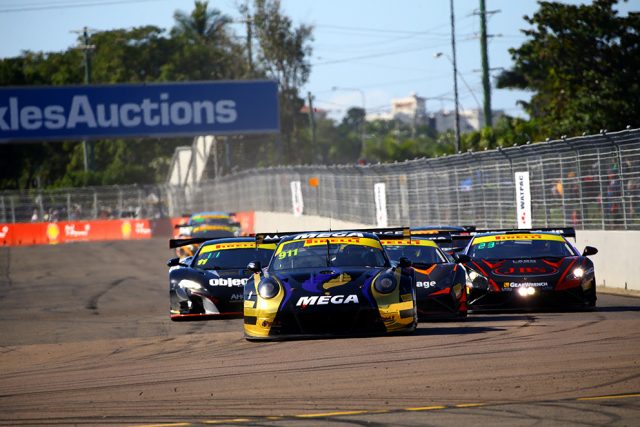 Liam Talbot leads a pack during the race

Liam Talbot has won for the third time this year in an Australian GT race marred by a big opening lap crash for Tony Bates on the streets of Townsville.

As the field ran through the Turn 1 sweeper for the first time, Steven Richards ran middle of the road before opening the steering lock in the mid-corner, seemingly in response to Tony Walls moving over on Richards’ inside. 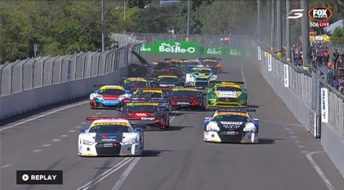 However, Richards had Bates overlapping on driver’s left, with the pair banging together and knocking the latter’s #24 Eggleston Motorsport Mercedes AMG GT hard into the outside wall.

Bates then rebounded across the track and made front-on contact with the inside wall before finally coming to rest.

The Round 1 winner was conveyed to the medical centre as a quarter of an hour passed under Safety Car.

Meanwhile, Max Twigg lost a lap when he had to pit and fix damage to the #8 WM Waste Management Mercedes AMG GT under Safety Car due to a hit in the rear from Roger Lago (#23 JBS Lamborghini R-EX).

Needing to maximise their driving time, van der Linde and Walsh waited until the end of the fourth lap after the restart to swap drivers.

Samadi soon took over the race lead in time for another Safety Car period, when Andrew Macpherson (#51 AMAC Motorsport Porsche 997 GT3-R) spun and hit the wall on his own fluid after shunting Twigg.

The race restarted for a second time with just over five of 40 minutes remaining, Taylor making a huge lunge on Samadi at Turn 2 but not being able to pull up in time to hold the position.

He needn’t have worried, considering Samadi had just been issued a 5s penalty for breaking formation early at the start, a penalty which was already hanging over the head of Steven Richards as well.

Talbot inherited fourth position when Twigg pushed Walls off the road at Turn 7 on Lap 20.

Lap 24 marked the final lap of the race, and Talbot made the pivotal move at the very last corner as he got underneath Taylor to take a second position on the road which turned into the win when Samadi’s penalty was added.

“That was so wild, I don’t even know where to start,” said Talbot of the race.

“We had a bit of contact from an overzealous driver which pushed us wide and almost into a wall so we had to avoid that and we lost two positions, so it pure survival but we had the pace.”

Richards/Bergmuller (#100 Laser Plumbing BMW M6) ended up 12th, their penalty not actually making a difference to the final outcome.

Talbot’s win extends his championship lead ahead of two more races tomorrow at 0930 local time/AEST and 1355.

Next Story Bates discharged from hospital after Aus GT crash