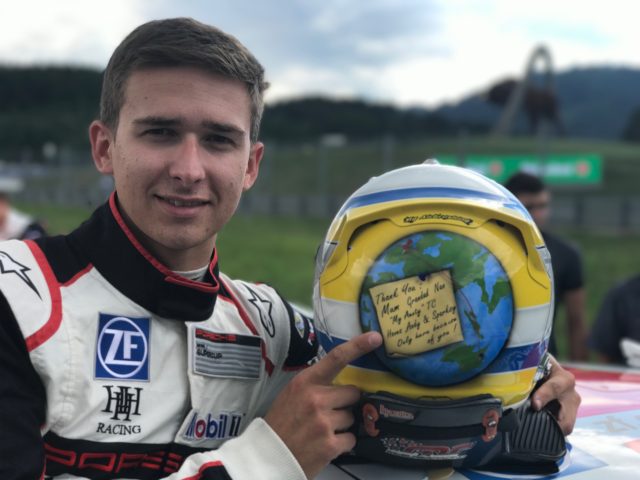 Matt Campbell with the latest version of his special crash helmet

He introduced him to motorsport, oversaw his building apprenticeship and was constantly scraping together the budget to give his boy a shot at the next level of his motorsport career, which continues with round three of the Porsche Mobil1 Supercup at the Red Bull Ring in Austria this weekend.

Bill was well-known in the Campbell’s home town of Warwick on the Darling Downs in regional Queensland, especially in the field of motorsports. 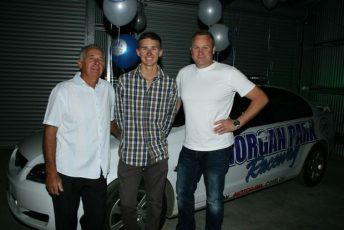 He was President of the Warwick District Sporting Car Club and oversaw the running and development of the Morgan Park track for more than a couple of decades.

On a Tuesday in March 2015 Bill Campbell worked with his grandson in the morning before sending him on his way to Brisbane where he would sign a management agreement designed to provide the foundation for the rest of his life.

Sadly, during the course of that day Bill had a brain aneurysm and was rushed to a Brisbane hospital where he was put on a life support system.

Matt visited the hospital to spend time with his grandad before flying to Adelaide with his McElrea team later that night for the first round of the Carrera Cup Championship at the Clipsal 500.

The following day Matt was on a track walk on the Adelaide street course when a call came through to say that his grandad had passed away.

It was an incredibly tough situation for a kid that had only turned 20 a few weeks earlier and who was about to head into one of the most important weekends of his racing life. 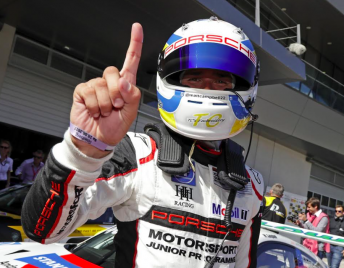 Bill never got to see Matt race a Carrera Cup car, let alone see him go on and finish third in the championship in his debut season before completely dominating the 2016 championship and being offered a once-in-a-lifetime opportunity in Europe this year.

“It was the toughest day of my life for sure,” Campbell told Speedcafe.com.

“He was absolutely my hero. He was the one who got me into motorsport, we worked together every day in business.

“He was everything to me and obviously that weekend was extremely tough. My life changed dramatically.

“I am sure he would be proud of what we have managed to achieve so far.”

To this day Bill is never too far from Campbell’s thoughts and a tribute remains permanently on the back of his race helmet.

In fact, the rear of Campbell’s helmet is a terrific “thank you” to the people that have put him in a position to make use of what is obviously a terrific natural talent as a driver.

Whether it is written in Crayon, on lego blocks or a post-it note on a map of the world, the message is the same.

“Thanks mum, Grandad, Nan, “My Aunty” (TC), Hoves, Andy and Sparksy. Only here because of you.”

The latest version of the helmet made its debut in the opening 45 minute practice session at the Red Bull Ring where Campbell was eighth quickest on older tyres.

His aunty Teresa (TC), a racer herself, actually taught Matt how to drive and remains one of his biggest fans. 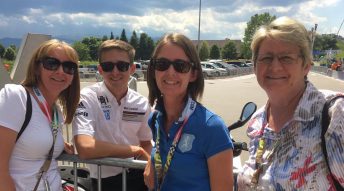 Matt Campbell with his mum Angela, aunty Teresa and grandmother Sharon in Austria.

Ironically, Teresa, Campbell’s mum Angela and grandmother Sharon have ventured to Europe this week to watch their boy in action against the best the Europe has to offer.

“Hoves” is Michael Hovey, a customer of McElrea Racing that offered up his seat in his Class A car when he could not make the final round of the GT3 Cup Challenge at Phillip Island in 2014.

It was an opportunity that would turnout to be a defining moment in Campbell’s career.

After making some progress in Class B through the season, Campbell stepped into Hovey’s car, took the pole by 1.8 seconds and won every race by no less than 12 seconds.

Hovey was also the first investor in MCR and his purchase of two of the company’s 18 shares provided the initial funding for the team to commit to the 2015 season.

Sparksey is Grant Sparks who was Campbell’s Challenge Cup team-mate in 2014 and who owns a large accountancy firm in Brisbane. 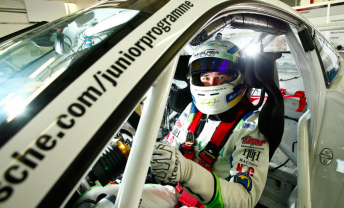 Sparks, along with McElrea and Campbell, is a director of Matt Campbell Racing and helped put all the commercial aspects in place.

He takes care of all the legals, minutes & accountancy and was present at the first MCR meeting to explain the sacrifices and outcomes Matt would be making financially if we sold all the units, and he became successful.

When Sparks explained the financial side of the plan, Campbell replied “I don’t care about the money, I just want to race”.

And that probably sums up Campbell who is just a humble and grateful kid from Queensland’s Darling Downs, who just wants to spend every waking minute in a racecar.

Campbell will contest a qualifying session today before a single race in the lead up to the Austrian Formula 1 Grand Prix tomorrow.