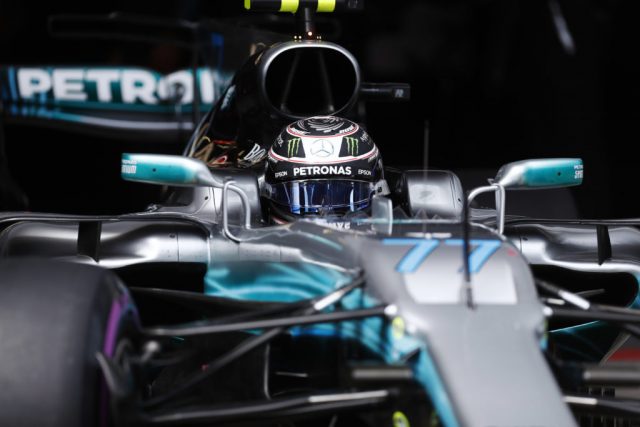 Valtteri Bottas has narrowly fended off Sebastian Vettel to claim his second career pole position ahead of the Austrian Grand Prix at the Red Bull Ring.

“It feels good,” Bottas said after the session. “The car was getting better and better as the grip was coming up. I had a decent lap in the end, it was not quite perfect but it was good enough.”

Lewis Hamilton could manage just third, which will see the Englishman start eighth following a five-place penalty for a gearbox change earlier in the weekend.

It proved an eventful session, with Romain Grosjean taking a tour through the gravel at turn seven in Qualifying 1 before grinding to a halt in the final part of the session.

On the other side of the garage, Kevin Magnussen suffered an apparent suspension failure as he exited turn three, wounding the Haas and forcing it back to the garage and out of qualifying with nine minutes left on the Q1 clock.

Having recorded the eighth fastest time, the Dane’s crew was unable to repair the car in time for him to take any further part in the session.

A slender threat of rain and mixture of tyre strategies saw a number of drivers queuing at pit exit ahead of the final phase of qualifying.

Among them was Max Verstappen, Red Bull splitting Daniel Ricciardo and the Dutch youngster’s strategies after Ricciardo was forced to use an extra set of tyres the progress through Qualifying 2.

Despite the luxury of three sets of new tyres, mistakes on all three runs for Verstappen saw him capable of only sixth fastest – his final attempt seeing him slide off the road at turn seven and bouncing through the gravel, ultimately lucky to keep the Red Bull out of the barrier.

Hamilton was unable to match the pace of his team-mate throughout the session and could do no better than third best on his initial run in Q3, before wild slide at the first corner curtailed his second attempt too.

The Englishman opted to abandon the lap, and with Vettel also unable to improve and the Red Bull’s not showing the pace needed to challenge him, Bottas duly recorded his second Formula 1 pole position.