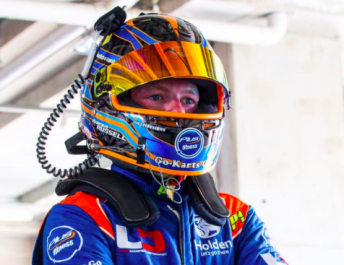 Aaren Russell says his sudden return to the Virgin Australia Supercars Championship has been a surreal experience.

The Novocastrian has inked an initial three event deal to pilot the #3 Lucas Dumbrell Commodore following the news that Cameron McConville has vacated his seat at the squad ahead of this weekend’s Watpac Townsville 400.

Russell sealed his Supercars return with the team last night in a move that will see him compete at Townsville, the Supercheap Bathurst 1000 and his home town Coates Hire Newcastle 500 event in November.

The 24-year-old was working at his family run Go Karts Go business in Newcastle when he found out there was opportunity to join the Supercars grid this weekend.

Russell will become the fourth driver to pilot the car this season following the footsteps of Taz Douglas, Matthew Brabham and McConville.

“It is all a bit surreal for me at the moment,” Russell told Speedcafe.com.

“One day I’m at work, and it being school holidays it was pretty busy, and all of a sudden I’m racing a Supercar at the weekend.

“I got a phone call yesterday saying, ‘pack your bags you are going to Townsville.’ It was a pretty incredible day yesterday, there were lots of emotions.

“I’ve just got to take this weekend as it comes really and try not to do anything silly.”

Russell had been in the running to secure the #3 LDM seat in time for the season opening Clipsal 500, having tested the car at the pre-season tyre test at Sydney Motorsport Park in February.

However, talks with the team broke down but he stayed in touch with the operation.

Securing a deal which included Bathurst and the Coates Hire Newcastle 500 was a key part of the negotiations given his eagerness to compete at his home town event from November 24-26.

Russell however hopes that he may be able to add more rounds to his current arrangement.

“We didn’t just want to do it for one round as I haven’t driven a car since the test day in February, so I’m keen to get back out and into the swing of things,” he added.

“I want to race at Newcastle as it will be such an amazing event given it is my home town. That was a big item that we wanted to tick off and of course you can’t miss Bathurst.

“We are going to try and push for more (rounds). It all just panned out so quick that it was just three things we wanted to get locked away.

“Now it is just a case of sorting out the nitty gritty items and see what else we can come too.”

The opportunity will see Russell return to the Supercars grid after a seven round stint at Erebus Motorsport last year, before splitting with the outfit after Townsville.

Russell admits the roller coaster experience saw him step away from motorsport for a period to regroup, but the former Dunlop Super2 Series drive is now hungry to show his talent his the category.

“I took a bit of time away from it all to be honest to clear my mind as last year was a roller coaster of a year,” he said.

“It took its toll on me last year so I have relaxed the last couple of months to get my bearings again.

“I have just been doing some karting and going back to grassroots to realise why I love this sport so much.”

Russell will jump behind the wheel for the first time in the opening practice session of the Watpac Townsville 400 on Friday at 1210 local time.