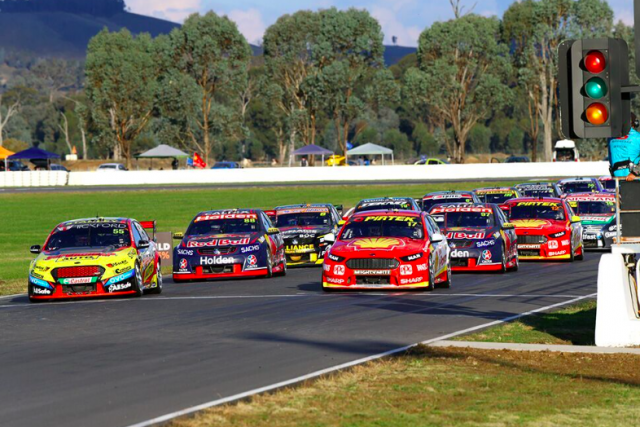 The Supercars season reaches its halfway point this weekend

Supercars veteran turned Fox Sports pundit Russell Ingall runs his eye over the Supercars season to date as the campaign reaches its halfway point at this weekend’s Watpac Townsville 400.

After 12 races the championship has provided plenty of talking points as the title battle begins to take shape.

Ingall sat down with Speedcafe.com’s Tom Howard to assess the key storylines from the first half of the season. 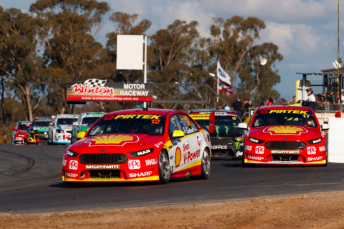 Fabian Coulthard leads Scott McLaughlin by 10 points in the standings

SPEEDCAFE: We are heading towards the halfway point, it’s obviously been a pretty impressive run from DJR Team Penske, can you see them being caught at all? How do you see it playing out?

RUSSELL INGALL: In any sport we don’t see just one team dominating for that whole time and Triple Eight had a pretty good run, but I just reckon DJR Team Penske are at a stage now where they’ve proven the big question mark which was always consistency.

They’ve ticked the box everywhere, which isn’t good for the competition because they’re going, ‘Oh here we go, they’re not one track wonders, they’ve actually got this sorted everywhere.’

The drivers have also lifted, especially Scott McLaughlin, but Fabian’s (Coulthard) lifted too. I don’t think he’s got enough credit for the effort he’s put in really because nearly everyone thought he was going to be steamrolled by McLaughlin and he’s risen to the challenge.

I mean he’s leading the championship so he’s done a good job and probably hasn’t got enough credit to his name for that, and it’s been a really good challenge for Scotty.

They make very few mistakes, their logistics are good, the Ludo Lacroix factor has obviously helped them and you can’t hide that fact. No team likes to admit that one person is bigger than the team, but they’ve probably shortcut three years’ worth of development by having him on board.

So they’ve got to the stage now where the dangerous thing for all of the other teams is they’ve got a good base set-up and I liken it to the years that myself and Marcos Ambrose were with Stone Brothers, where you could go anywhere and you’d be within one or two spring rates of the car being spot on. 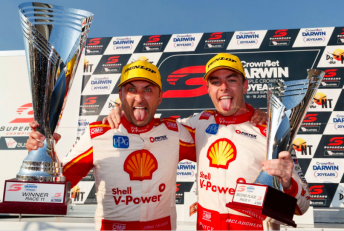 You look at some of the other teams going through the practice sessions and you see a lot more goes on in the garages, and there’s springs coming out and dampers and roll centres changes. We’ve seen that at Triple Eight during the last couple of rounds and I’ve never ever seen them change spring and damper packages during a qualifying session ever.

They’re going to be hard to roll.

SPEEDCAFE: How does DJRTP manage Fabian Coulthard and Scott McLaughlin with the pair both fighting for maiden championship titles?

Ingall: It sounds like up the pointy end they’ve got some pretty strong heads there, that I think behind closed doors are pretty strict you know; that’s what I’m led to believe.

There’s no doubt that comes from the experience with all the other teams that they run, especially in the US with IndyCar and NASCAR.

You think of NASCAR; look at drivers in the same team of a super-aggressive sport like that, imagine what goes on behind closed doors there, so if you can manage those drivers, you can manage them here pretty well. 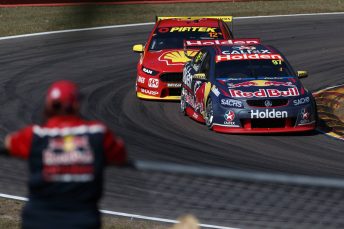 It’s going to come to a head, there’s no doubt about it, because if it’s coming to two or three races to go in the year and there’s still the same margin, or very close, we’re soon going to find out who wants it more.

I would like to think that Fabian at this stage of his career, is going to want it more, because his time is running out whereas Scott’s has just started.

So if push comes to shove, you would think Fabian’s going to shove harder and go for the win, so that’s when politics is going to really kick in.

SPEEDCAFE: Triple Eight clearly have the resources and might to come back at DJRTP, you shouldn’t rule them out of the title race?

Ingall: Of course not, and again, they will be well aware of the Ludo Lacroix factor because he’s been around there for so long.

Roland (Dane team owner) would be absolutely hating it, in a good way, because he likes a fight and that’s what sport is about.

You don’t want to see one side dominating all the time, you want to see a few challengers come along, and he’ll be thriving on it and he won’t lay down.

He won’t be lying down, he’ll be in the background making sure he comes out alright.

SPEEDCAFE: Prodrive seem to have slipped off the pedal following Darwin. Do you feel they can come back? 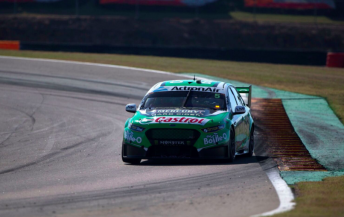 Prodrive’s Mark Winterbottom has scored just one podium this year

Ingall: I’d like to think so because I’d love to see three teams in the challenge, but when I see the former championship runner and a very talented driver in Mark Winterbottom scouting around the bottom end of the [top] 10 in races, it’s not a good sign.

And with Chaz Mostert, who I regard as every bit as good as McLaughlin, I can see he’s getting frustrated, his crew are getting a little bit frustrated as well.

To be honest, I think they’ll just be looking now for results rather than a championship this year because of the way they’re heading.

SPEEDCAFE: There have been a lot of surprising performances. Who has stood out and impressed you the most? 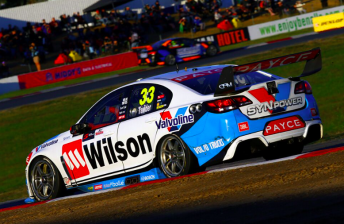 Ingall: I think the GRM crew have done a really good job considering the debacle with Volvo pulling out and having to go back to a Commodore, and it wasn’t just the shell, it was engines as well.

Luckily doing the right thing and sourcing engines from Walkinshaw, which are strong engines, obviously helps shortcut the process, but even still it’s a big upheaval to build cars over Christmas and roll out, new driver as well, and then the other driver getting used to a Commodore instead of a Volvo again.

You couldn’t get any more thrown at you if you tried and all of a sudden they crop up and Garth Tander was kicking around the top dozen until Darwin.

That’s a pretty good effort and Tander will be a dark horse for Townsville because he’s had a lot of success there, a good street circuit racer.

SPEEDCAFE: It has been a difficult season for HSV Racing, featuring a big upheaval following the sacking of Adrian Burgess, what have you made of their campaign?

Ingall: I think (their difficult run) is the result of a combination of things, I don’t think you can point your finger at one thing or person. 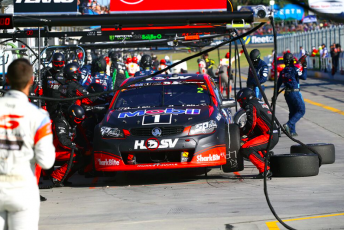 Where they have fallen down is that in today’s environment you have got to get things done fast. Other teams have made that happen, they have developed things quicker and found speed in the cars.

The team has just been too slow to progress and that has been the issue. I think that has generally been admitted. The fact is they have been caught with their pants down. Rehashing the same thing doesn’t fly and it has been proven.

The problem now is to try and catch up quickly is going to be difficult. I think to shortcut the process they are going to have to link up with another team or parts supplier. To try and do it yourself is hard work if you haven’t got the expertise there.

You look at Penske and their biggest swing around has come from getting Ludo Lacroix. They were on their way but without Ludo they would still be a couple of years down the track. At HSV they haven’t got that factor there.

They have got to shortcut the process by obtaining the right go faster bits and until that starts happening I can’t see any improvement. 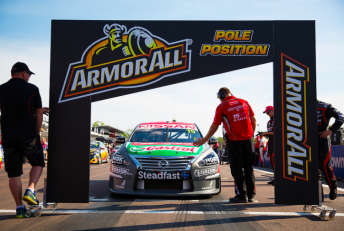 SPEEDCAFE: Nissan have also had some struggles this year, do you see some green shoots coming?

Ingall: Not unless they get the engine underneath them. I think they are still deficient in that area. It is a very linear engine and I’ve driven the thing.

It has come on a bit better since I drove it at Sandown last year. I think it is real shame because the car preparation is really good and the crew is good.

I think the window of that Nissan is very small. At Darwin in the right conditions it was on pole but the track conditions changed and the tyre changed and all of sudden they were back down in 15th position.

The performance is there but at the moment it is very hard for them to tap into and it shows in the results. Until they can widen that window they are going to struggle a little bit, and it is shame because when it is on it is a good car.

SPEEDCAFE: Simona de Silvestro joined the series this year with Nissan, how do you rate her performances? 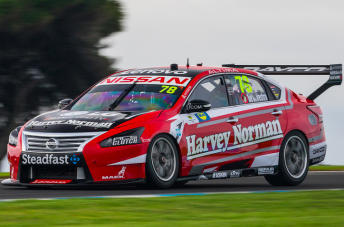 Ingall: I think a lot of people thought she was going to struggle like hell with the task of learning new circuits and the car at the same time.

Going from open wheels to these cars is a big change but I think she has done real good.

She has raced well and doesn’t get flustered no matter who it is giving her a hard time, but for anyone in the know that isn’t a surprise.

As far as drivers go she is the real deal.

For sure she will crack a top 10 before the year is out. It is just getting her head around the qualifying, I think if you look at her race times she is capable of staying in the top 10.

SPEEDCAFE: Another newcomer to the series has been schoolboy Alex Rullo at Lucas Dumbrell Motorsport. The 17-year-old has found himself in the deep end but has shown some positive signs. What do you make of his season? 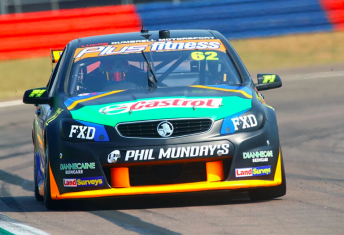 Alex Rullo has become the youngest ever Supercars driver

Ingall: I think it would have been better to put him through Dunlop Super2 because it is a big jump to Supercars. We have seen from the wildcards, this season, and they are good steerers, how much of a battle it is racing in Supercars.

That is my opinion but that isn’t the option they took. I think considering what he has been up against he has done a better job than most thought. He has blotted his copybook a couple of times but that is part of the learning process.

Next year he could come out and be on top of it but at the moment the jury is out.

FOX SPORTS will deliver every practice, qualifying session and race from the Watpac Townsville 400 live and ad-break free.