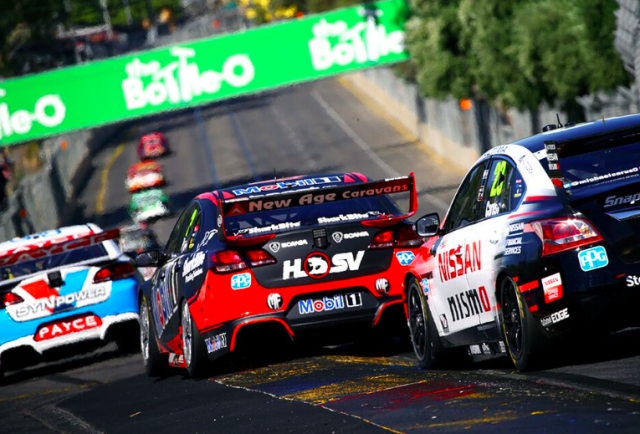 The Clayton operation has proven particularly strong on street circuits with nine of its last 12 podium visits arriving at such venues.

Facing one its most troubled campaigns in its history, the squad has maintained form at street circuits with its only podium emerging at the season opening Clipsal 500 in Adelaide, courtesy of James Courtney.

Townsville’s Reid Park street circuit has proved a happy hunting ground for the team, having scored at least one podium at the event each year since the race’s inception in 2009.

During that period the outfit has enjoyed three race wins delivered by former Walkinshaw driver Garth Tander in 2011, 2013 and 2014.

In contrast, this season has proved a struggle since Adelaide for the former factory Holden team, with just a solitary top 10 result scored by Scott Pye at Darwin.

While Walkinshaw Commodores appear much more suited to street circuits, Nilsson is keeping a lid on expectations this weekend as the squad continues to rebuild following the sacking of team principal Adrian Burgess in May.

“You can obviously take confidence (from previous Townsville results) but we are realistic as well,” Nilsson, told Speedcafe.com.

“We can use the history to help us learn better in improving the car.

“We’re not reading into all the previous results at Townsville and taking anything for granted that’s for sure.

“We are going in with a open mind, it (the street circuit form) certainly helps and we are trying to use it to our advantage in some respects.

“The team has had success there in the past but we are going through due diligence and everything and making sure we learn as we did at Darwin.

“We tend to do well at those circuits. It is factor we are aware of and we have just got to use that in the right way.”

After scoring a breakthrough top 10 at Darwin last time out, Nilsson believes the team is beginning to see results from weeks of hard work completed at the factory.

“You always like to think (that we are seeing light at the end of the tunnel),” he said.

“It is still very early days with some of the changes that have gone on so I’m just happy at the progress we are making and we will just keep working away at it.

“We just want to be seen that we are making progress with our position on track or by closing the gap to the guys at the front. That is all we ask for.”

While many squads conducted test days prior to Darwin, the Walkinshaw concern has elected to wait until it has a sufficient amount of new developments to trial.

As a result, the team is now eyeing a test day in early August following the Coates Hire Ipswich Super Sprint.

Nilsson says his team’s cars will travel from Townsville straight to Queensland Raceway instead of returning to its Melbourne base during the three week break between races.

“We are probably aiming for one in early August at this stage. We are still building an arsenal of things to take to a test,” he added.

“We are staying in Townsville to prepare the cars and we then go straight to Ipswich. I know it is a three week gap, but Erebus chose to do something similar after Darwin.”

Mobil 1 HSV Racing drivers Courtney and Pye will head out on track for the first time this weekend during Friday’s opening practice at 1210 local time.