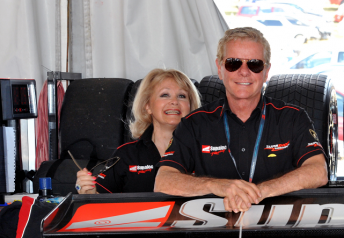 Australian GT driver Kevin Weeks says that he will continue to participate in motorsport despite his ongoing battle with Parkinson’s disease.

Weeks, previously a regular in the Australian GT Championship, has been largely unseen in motorsport since a major crash in that category at Sydney Motorsport Park in August 2015.

The South Australian was diagnosed with Parkinson’s in October 2013 and underwent revolutionary brain surgery in an attempt to cure the condition in December 2016.

His battle with Parkinson’s was highlighted by a recent piece on Seven’s Today Tonight program, which chronicled Weeks’ 2,450km bicycle ride from Adelaide to Rockhampton for therapeutic reasons.

However, Weeks says that the condition has not kept him away from motorsport, with an entry for the recently passed Pikes Peak International Hill Climb having been in the works until being scuttled by mechanical problems.

“Since my diagnosis, I recorded my fastest lap around Mallala in my (Ford) GT40, so even though I’ve got a tremor, it doesn’t seem to have affected my response times at all,” Weeks explained to Speedcafe.com.

“In fact, if anything they’ve got a little bit better, so at this point I’m still competitive and still enjoy motorsport; I want to continue.”

“The reason for the bike ride was just to prove to myself that I could do it, and to improve my Parkinson’s, which it has done considerably.

“It’s proven scientifically that cycling actually stimulates the neurons in the brain to utilise the dopamine that they’ve got available more effectively.

“You need less dopamine to get the same result that you did previously without bike riding, so it’s very positive.” 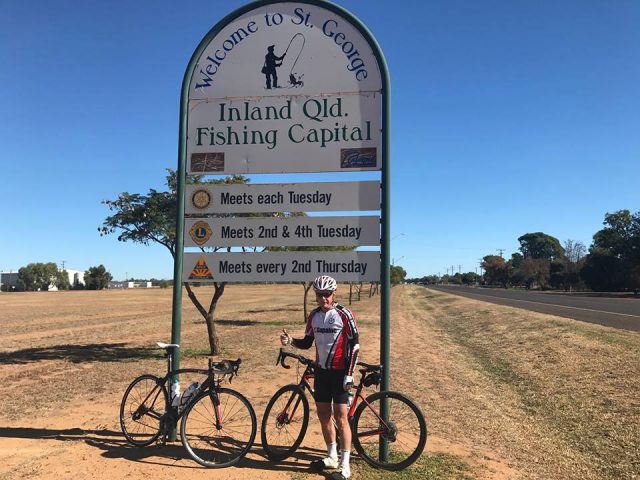 Weeks during the ride from Adelaide to Rockhampton pic: Supaloc Facebook

While the actual triggers for Parkinson’s are not yet properly understood, according to Parkinson’s Australia, the condition arises as a result of a shortage of the chemical dopamine in the brain, which causes sufferers to have difficulty to control their movements.

Weeks has also become one of the first people in the world to undergo experimental brain surgery involving the injection of stem cells, aimed at curing the condition.

The 67-year-old underwent the procedure in Melbourne in late 2016, and is confident that he will be one of the first to benefit from what would be a major breakthrough in the fight against Parkinson’s and other neurological conditions.

“I had brain surgery in December of 2016, with the (hoped-for) outcome within the next 18 months of controlling the Parkinson’s and perhaps even curing it,” he recounted.

“It was injecting 30 million undifferentiated stem cells into 14 different locations in the brain, and what those stem cells do is replace the dopamine-producing neurons that are not efficient any longer.

“The whole purpose of that is that the undifferentiated cells enter the brain, they become the cells that have been affected, and basically you’ve got a new set of neurons.

“It’s revolutionary, and if it works – and we’re confident it will – it’ll set the pace for surgery in the future and certainly for Parkinson’s and MS (multiple sclerosis) and maybe even motor neurone.

“It was world’s-first surgery, I was the second person in the world to have the surgery, and it’ll take about 18 months for the neurons to connect.

“I’ve still got another 11 to 12 months to go before I get better, but at this stage we’ve got to wait and see.”

Weeks was to have been in action at Pikes Peak (June 25) in a modified Lamborghini Gallardo which he had previously campaigned in Australian GT, but he and the Italian machine are now set to appear again at Sydney Motorsport’s annual World Time Attack.

“We had it ready to do Pikes Peak and we had an entry in Pikes Peak but we blew the engine six weeks out and we couldn’t get the parts in time to get it in the container,” said the managing director of Supaloc.

“At this stage, we’ll probably enter that next year, and at the moment we’re just going to be doing hill climbs and some fun stuff for the next six to 12 months.

“We’ve turbocharged it and it’s got a new aero pack on it, so we probably will be doing Time Attack with it this year.”

See below for Today Tonight’s story