Prodrive committed to Falcon FGX for 2018

Prodrive committed to Falcon FGX for 2018 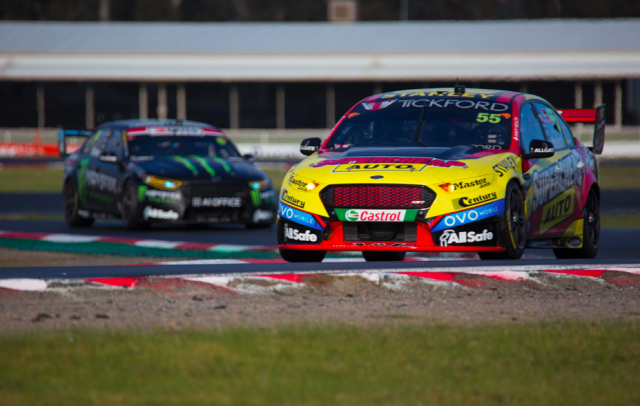 Prodrive Racing Australia has committed to running the Falcon FGX package in Supercars next year as it continues to assess its options for 2019 and beyond.

The Melbourne squad has been evaluating possible replacements for the Falcon FG X, which is no longer in production in Australia.

The possibility of developing a Ford Mustang for 2018 had emerged with Prodrive and fellow blue oval outfit DJR Team Penske collaborating on feasibility studies for the project.

Such an undertaking would require approval from Ford, who withdrew manufacturer support from Supercars at the end of 2015, and a substantial amount of time to homologate and develop the car for next season.

Prodrive said it was yet to make a decision on the Mustang in April when responding to a Daily Telegraph report that claimed it was set to introduce the car in 2018.

However, with time running out to receive the green light, Prodrive boss Edwards has confirmed his operation will continue with the Falcon FGX.

“We are not sure what we will race in the future, but I can confirm we will be racing the Falcon FGX in 2018,” Edwards told Speedcafe.com.

“We are only in the third year of racing this car. We raced the FG for five or six years so it is not like it is dated and it is still competitive.

“We are not at all concerned and in some ways you could say we are happy. We don’t have to distract ourselves and can focus on making this car go faster and faster.”

Edwards maintains his squad is continuing to evaluate all of its options including the Mustang for 2019 onwards.

Having worked with DJR Team Penske in homologating the FGX, which won the 2015 Supercars title and currently leads this year’s championship, he expects the relationship to continue if the two teams run Ford products in the future.

“Everything is an option for 2019 and if we are both racing Ford products then there is the likelihood we will work together to develop it,” he added.

“That is pretty much the way homologations have worked in the past.

“We took more of a lead role with the FGX but Penske still contributed financially to that.”

While the shape of its car will be unchanged for next season, the squad is also working to extend Chaz Mostert’s stay at the team.

The 25-year-old agreed a new two year contract back in 2015, which included an additional two-year option.