Marko: Red Bull can win on merit this season

Marko: Red Bull can win on merit this season 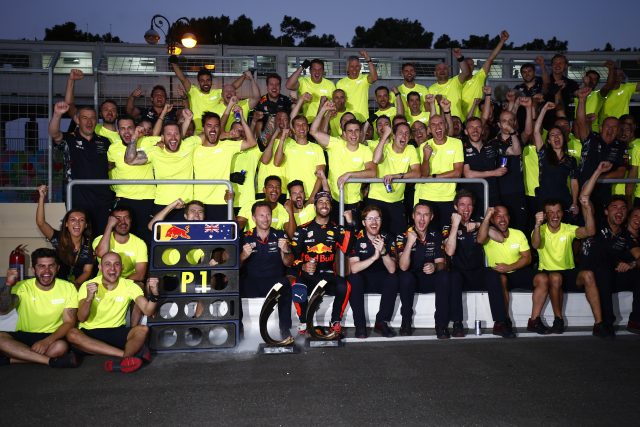 Red Bull can win on merit before the end of the 2017 Formula 1 season, according to its motorsport advisor Helmut Marko.

Daniel Ricciardo took an opportunistic first victory of the year for Red Bull in last weekend’s Azerbaijan Grand Prix, after benefiting from an incident-filled race.

Second placed Sebastian Vettel was penalised for a clash with Hamilton while Kimi Raikkonen and Valtteri Bottas were involved in an opening lap collision.

But prior to that, Red Bull had shown its strongest form of the season in Baku setting the Friday practice pace and Max Verstappen was running third before an early engine problem.

Ricciardo achieved his win despite dropping to 17th when debris in his car forced an early first pitstop.

“It’s very, very important because we had such a bad start to the season, and now we’ve improved,” Marko said.

“We couldn’t show it in qualifying, but we knew our speed was good.

“Daniel was running in safe mode, not with the extra (power), because what happened with Max meant we were careful.

“The direction is OK, and I hope that at the right circuit, we can win on our own.

“I thought winning from fifth may be possible, but from 10th place and then dropping back to 17th?

“We were always there and he drove a faultless race like he did in the last four races, and we were just matching the speed, and they couldn’t catch us.

“Our chassis is good, we are bringing updates, Renault is working on the engine.”

Verstappen’s failure was the second time in as many races that he had been forced to retire from a top-three position with an early mechanical problem, and Marko acknowledged the Dutchman is getting frustrated.

“Max’s time will come, we just have to wait,” he said.

“For him it’s really now four times not finishing out of six races.

“It is really tough, and to see his team-mate winning is also not easy.”

Marko’s initial belief was that debris could have contributed to Verstappen’s failure.

“It was unbelievable. We had parts in the brake duct of Ricciardo and we had to stop, we had a big part in the cooling area from Max, and maybe the engine problem is resulting from overheating before this part fell away,” he said.

“It was a big piece of carbonfibre but it blew away, unfortunately after three laps.”

Although outside influences may have played a part in Baku, the ongoing reliability problems remain a concern for both Red Bull-owned teams.

“That we have to overcome, and it doesn’t help to complain,” Marko added.

“We had a discussion together with Renault, how we could make things better.

“They always on Monday exchange experience from the race, but we have to work even more closely with all these little incidents.

“It’s not only with us, it’s with Toro Rosso, Renault itself, to make sure that nothing is happening twice.”