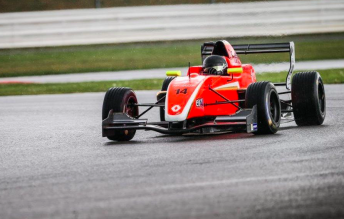 The Victorian driver is set to join AV Formula for the balance of the Formula Renault 2.0 season after striking a last minute arrangement with the Spanish outfit.

After undergoing a seat fitting and brief run in the simulator last week, the 21-year-old will join the championship for this weekend’s round at Hungaroring, Hungary.

Randle, who finished fourth in the BRDC British Formula 3 Championship last season, has been focussing on sportscars this year by competing in the British Prototype Cup LMP3 Series.

Having spent time away from single-seaters, the reigning Toyota Racing Series champion is eagerly anticipating the opportunity to race in one of Europe’s most hotly contested championships.

Randle will join a quartet of Australians already competing in the category that include Alex Peroni, Luis Leeds, Thomas Maxwell and Zane Goddard.

“After my title-winning success in the Toyota Racing Series at the beginning of the year, it’s great to be getting back behind the wheel of an open wheeler again, and in such a competitive championship,” said Randle.

“I am truly thankful of AV Formula for the opportunity and also Rusty French for helping make this possible.

“AV Formula have a competitive car so I will be interested to see how I fare in the competition.

“That being said, I won’t be putting any unrealistic pressure on myself and will be looking at consistently improving every time I get into the car.

“I am going to thoroughly enjoy this experience and racing in a genuinely competitive series on some of the world’s best racing circuits.”

“Here at AV Formula we are really happy to welcome Thomas to the team and from initial simulator testing his results showed he was immediately on the Eurocup pace, while his previous results and winning the most recent TRS title supported those findings,” said Valles.

“The Eurocup Formula Renault 2.0 Championship is a very competitive series, with the other drivers already having an advantage over Thomas from the races they’ve contested so far this year and also the four completed test days.

“We are confident though that we can get Thomas up to speed quite quickly and look forward to providing the maximum support we can to give him with what he needs to be fighting it out at the front of the field.

“We also feel confident he can finish the year strongly, which will help Thomas with his 2018 plans and we’re all really looking forward to working with him.”