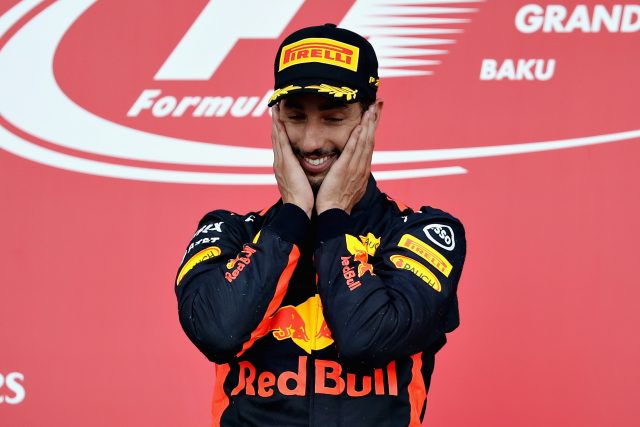 Daniel Ricciardo admitted to being speechless after scoring a surprise comeback victory in a chaotic Azerbaijan Grand Prix.

The Red Bull driver managed to avoid a series of incidents to fight back from an early brake issue to score the fifth victory of his Formula 1 career.

Ricciardo dropped back to 17th position after an unplanned pit stop to clear debris from a brake duct on his RB13.

The Australian pitted under the first Safety Car to switch back to the faster super-soft tyres, which helped him rise up to fifth, before the race was red flagged due to debris on track.

He swiftly moved to third following a stunning overtake on the Williams’ of Lance Stroll and Felipe Massa at Turn 1 to claim third on the restart.

A surprised Ricciardo then inherited the lead when race leader Lewis Hamilton (Mercedes) was forced to pit due to a loose headrest, while second placed Sebastian Vettel (Ferrari) was issued a 10 second stop/go penalty for colliding with Hamilton under the Safety Car.

“It was a crazy race, we knew the podium was a chance after the restart but then we heard the problems with Lewis and Seb, it was just a crazy race,” said Ricciardo.

“I made an unplanned pit stop at the beginning, after a few laps we had some debris in the brakes so hard to stop and clean it, we dropped back to 17th.

“Did I think then I’d win then? Absolutely not, I would have put all my money on it that this was very unlikely.

“This is the race we expected last year with all the Safety Car and all the chaos and we got it this year.

“I was honestly speechless after the race, on the cool down lap I was just giggling like a little schoolboy.”

After crashing out in qualifying on Saturday, Ricciardo believes staying out of trouble proved key in finishing the weekend on a positive note.

“Obviously yesterday I was disappointed with the mistake but I guess you’ve got to make these (errors) to try and fight for that last little bit,” he added.

“I knew today would be a different outcome, I said yesterday we had to stay out of trouble and it certainly paid off today.

“Big thanks to Red Bull, nice to get one car home and on the top step.”

Ricciardo has moved ahead of Kimi Raikkonen to fourth in the championship standings, while Vettel leads Hamilton by 14 points.