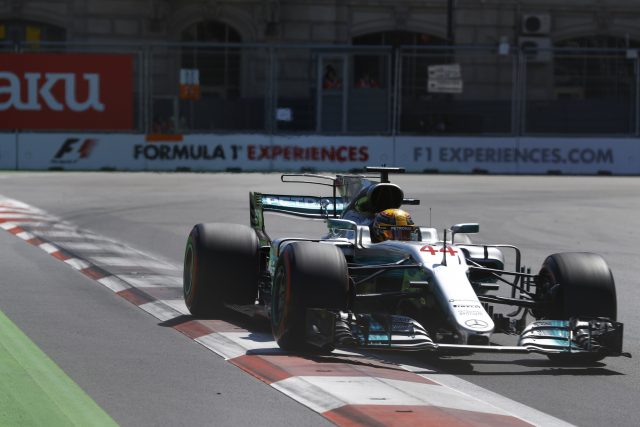 Lewis Hamilton overcame Mercedes team-mate Valtteri Bottas to claim pole position for the Azerbaijan Grand Prix in a qualifying session that was red flagged after a crash from Daniel Ricciardo.

The battle for pole came down to a straight fight between the Mercedes duo when the session resumed with three and a half minutes remaining after a brief stoppage when Ricciardo tagged the wall at Turn 6.

Bottas held provisional pole before the stoppage but he was unable to hang on as Hamilton produced a blistering 1:40.593s final effort.

The three-time world champion snatched his 66th career pole position by a stunning 0.4s having been the only driver to break into the 1:40s bracket.

Bottas also improved on his last lap but was left to settle for second, while a late effort from Kimi Raikkonen saw the Ferrari leap up into third.

Ferrari secured the second row after Sebastian Vettel came through to fourth late on, ahead of Red Bull’s Max Verstappen, who had held third for much of Q3.

Meanwhile, it proved to be a disappointing session for Ricciardo with the Australian’s crash dropping him to 10th on the grid.

Daniil Kvyat narrowly missed out out on the top 10 in 11th in front of Toro Rosso team-mate Carlos Sainz, who will slide to 15th following a three-place grid drop for causing an opening lap crash at the Canadian Grand Prix.

Romain Grosjean continued to struggle with his Haas F1 in 16th ahead of Sauber’s Marcus Ericsson.

The McLarens of Stoffel Vandoorne and Fernando Alonso will be towards the back of the grid after incurring 35 and 40 place grid drops for power unit component changes.

Renault’s Jolyon Palmer was forced to sit out the session after a fire broke out at the rear of his car in Practice 3 due to a fuel leak. The Brit is set to take 20th on the grid.