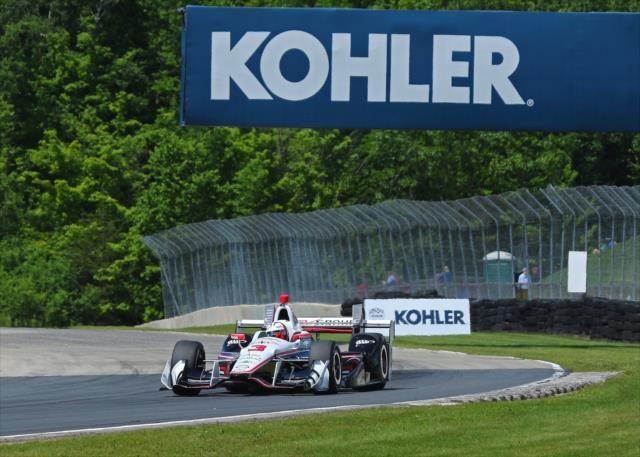 Helio Castroneves has pipped Will Power to pole position for the Road America IndyCar race as Team Penske locked out the first two rows of the starting grid.

Such was the Penske Chevrolets’ dominance, they swept the top four in both Friday’s Practice 2 and the day’s earlier Practice 3 session, led on those occasions by Josef Newgarden and Simon Pagenaud respectively.

Castroneves’ final lap of qualifying was enough to edge Power by just 0.06s, earning the Brazilian his 50th IndyCar pole.

Behind them, Newgarden and Pagenaud were each a few tenths further back, giving Penske its fourth one-two-three-four in qualifying in history.

All were comfortably clear of the other two men to make the Fast 6, with Scott Dixon more than 1.6s off pole and nearly 0.9s adrift of Pagenaud in the New Zealander’s Chip Ganassi Honda.

Graham Rahal opted against using his red tyres in the Fast 6 and was never a factor in the final stage of qualifying in his Rahal Letterman Lanigan Honda.