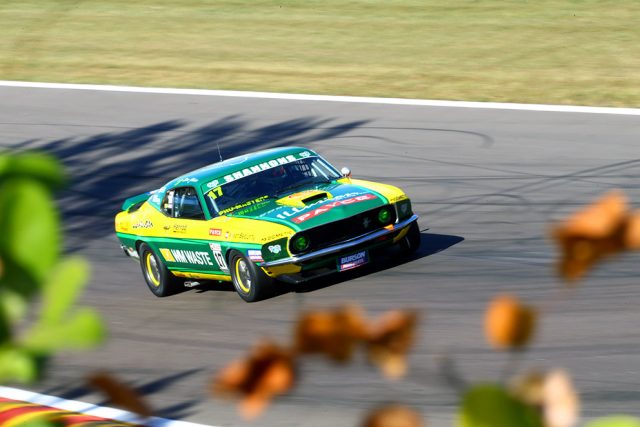 Team Johnson enjoyed its first race and round wins during Round 3 of Touring Car Masters at the CrownBet Darwin Triple Crown.

Off the track, the team has recently branched out into its own merchandise range as Steven Johnson aims to build on the family racing dynasty, having announced the formation of the team-up with father Dick in February.

Speedcafe.com spoke to Johnson about the motivation for the venture, the future for Team Johnson, and also his thoughts on DJR Team Penske.

QUESTION: Team Johnson launched this year. Can you tell us more about the structure of the team and how things are progressing?

The whole idea behind it is getting back to being a family team and Touring Car Masters is one of those categories that’s very, very popular. Everyone seems to love them, they love those cars, they’re still loud, they’re fast, and the racing’s generally pretty tough. To have our own, very scaled-down team compared to a Supercars team but get back to the grassroots of racing and really enjoying it and doing it as a family again is what it’s all about.

We’ve had a mega response from everyone regarding it, not only in followers but just in responses and people coming to see us at the track too. That’s the reason behind it all and also that we’re controlling our own destiny as well. 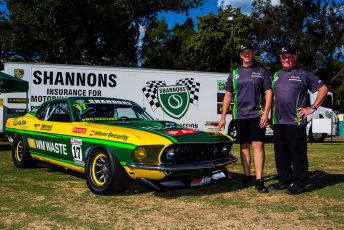 QUESTION: So how exactly does your Dad and the rest of the family fit into the operation?

JOHNSON: Dad and myself are sort of heading up the team but my wife Bree’s involved and my sister (Kelly) is involved at the moment as one of our biggest supporters; she loves it and loves the racing. Every time we do well, she’s the first one to put up a post or do something about how good it was.

We’d love to be able to build Team Johnson into a business that can be self-sustainable and maybe employ two or three people like my sister and a few things like that.

We’ve had my uncle, my Dad’s brother Dino (David Johnson), working on the car between rounds and we’ve built it up into a worthwhile little business that that we can carry on with the Johnson name for the next 10 or 15 years or more, maybe longer depending on what my son (Jett) does.

QUESTION: This is your third year in Touring Car Masters. Is it keeping you busy?

JOHNSON: It certainly keeps us in the seat and keeps me driving. Obviously, it was only a part run in 2015 when I got a few opportunities with John Bowe’s team running the Mustang (initially as a substitute and then team-mate to Bowe) and then last year we had our own little team before we ended up really forming Team Johnson at the start of this year.

It’s our own little team that we’re running and, as we grow it, we’re just going to bring out our merchandise range. That’s only going to be small to start with because we don’t want to overdo it at first and throw away money.

We’re starting off small, making sure that it all goes well and it’s popular, and then we can build from there.

The website, TeamJohnson.online, is up and running, with the shop there for the merch and for all updates and that sort of thing. We’re just slowly taking a step at a time and not biting off more than we can chew.

QUESTION: What’s been the response to the new website and the merchandise range?

JOHNSON: The website hits and also the messages and the pre-orders for the merchandise have been phenomenal; really, really good. We’ve only ordered 400 shirts, 500 caps, and 500 stubbie coolers at the start, and nearly a third of it’s gone already, and it hasn’t even arrived yet.

Initially we’ll probably just sell it from my TCM pit and then as it gets bigger and bigger, we might look at moving into the merchandise alley and getting TCM or some help from someone to promote and sell it.

At the moment, we’ll do it online and run it out of our TCM pit and hopefully we can have it all sold fairly soon. 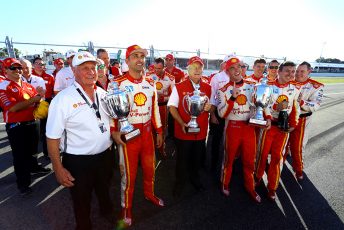 QUESTION: Looking at DJR Team Penske, what do you make of their progress so far, particularly considering the ‘DJR’ in the team name?

JOHNSON: It’s no secret that Roger Penske owns the majority of the team but he’s a very smart man and he understands that having Dad involved still in a decent role is very important for the success of that business, because of his legacy and what he’s done in Australia.

I think the biggest thing for me is that all the pressure’s taken off Mum (Jill) and Dad now; the financial stress, everything’s been taken from them.

Obviously, the success is there and they’re enjoying it more, and I’m happy that the race team’s going well.

However, I’m probably even happier looking at the amount of stress that Mum and Dad haven’t got nowadays compared to what they had in the past three or four years.