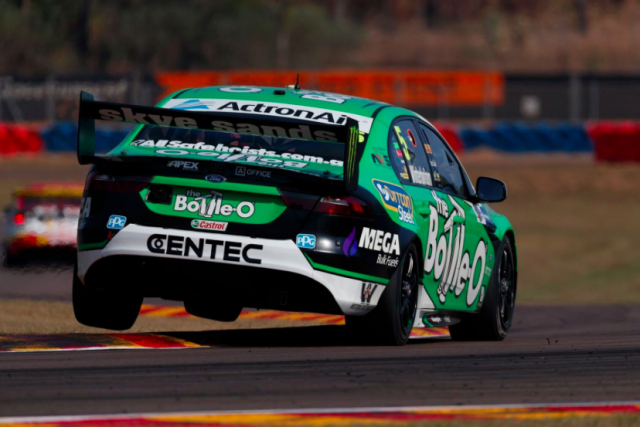 Prodrive Racing Australia is refusing to panic despite suffering one of its worst race meetings at Darwin last weekend, according to team boss Tim Edwards.

The four-car Ford outfit struggled to match the pace of the front running DJR Team Penske and Triple Eights squads throughout the weekend at Hidden Valley Raceway.

Prodrive headed to the Top End following a productive test day at Winton, although the gains made in testing failed to materialise into performance at Darwin.

Chaz Mostert scored the team’s best result of fifth in Race 11 while Cameron Waters proved the most consistent performer with two top 10 results.

The weekend provided another blow to Mostert and Mark Winterbottom’s championship charges as the pair slipped to 304 and 406 points adrift of the championship lead in fifth and sixth respectively.

Winterbottom finished both races in 14th position after battling a distinct lack of grip with his #5 Falcon FGX.

The deficit to the front runners surprised Edwards leaving the team to dig deep at its workshop to find answers before the Watpac Townsville 400 from July 7-9.

“We certainly weren’t where we expected to be,” Edwards told Speedcafe.com.

“We went there to win the race so we have got some work to do.

“The guys will dig bit deeper and we will try to get on top of it.

“It was undoubtedly the worst race (Sunday) we have had in a long time, but we are not going to go hang ourselves because we had one bad round.

“All of the sudden when you have a bad round some people want to get shotguns out, but that is not the way we work. We support each other.

“We will come back fighting at Townsville.”

Edwards felt gains made during the test day at Winton may have contributed to upsetting the balance of the Falcon in other areas at Darwin.

“All you can do is try and learn on the test track we are allowed to test at, and then test these things in practice on a race weekend,” he added.

“You could argue we may have got a little bit of a bum steer at Winton, but I think some of the stuff did help us at the weekend.

“However, I think it might have had a negative impact on other aspects of the car that were great before. It is always a trade off.

“You can’t have everything in life. It is a balancing act.”