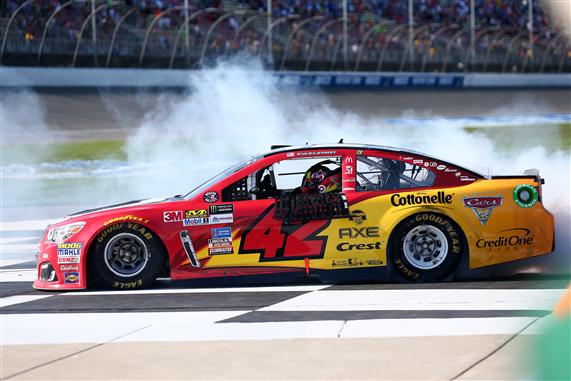 Second win of the year for Kyle Larson

Kyle Larson has underlined his championship credentials with his second win of the season after taking victory at Michigan.

Larson got the jump on a restart with five laps remaining in a race that he was one of the dominant drivers in.

The Chevrolet driver started on the pole and led a race-high 96 laps to score back-to-back wins at the same track.

Chase Elliott scored his best result of the season with a second ahead of Joey Logano, Denny Hamlin and Jamie McMurray.

Larson had all the pressure with three late cautions meaning he had to hold off the field each time.

“We’ve been so close to so many other wins,” said Larson.

“This is the second Cup win of the year but we’ve had six second-place finishes, which could be 30 more (playoff) points.

“All in all, good season so far and we’ll continue to build on what we’ve got.”

There were 10 lead changes among four drivers.

There was just one retirement from the race and that was the unfortunate Danica Patrick, who got sent into the inside fence on the second-last re-start. Ryan Blaney was dropping through the field with what looked like a tyre issue.

It bottled-up Kevin Harvick, Daniel Suarez and Bubba Wallace, who turned into the path of Patrick and fired her car off into the fence.

That’s more than twice as many as his nearest competitor; Kyle Busch has four stage victories.

Larson regained the points lead with his second win of the season. He has a five-point advantage over Truex.