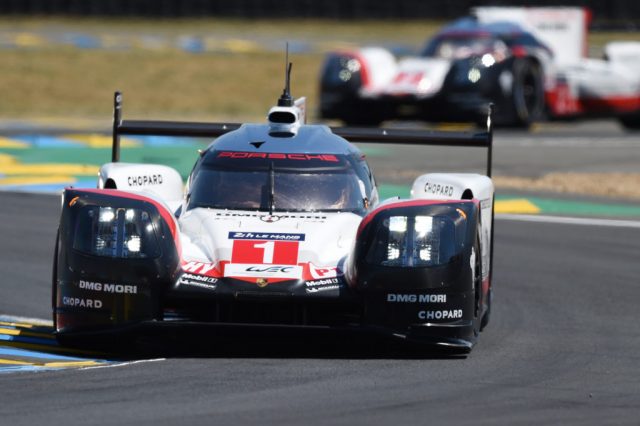 The race-leading #1 Porsche has stopped on track with oil pressure problems with little more than four hours left of the Le Mans 24 Hours.

Inside the car, Andre Lotterer lost power in the car heading into the 318th lap, crawling to a halt little more than a third of a lap later.

Porsche had led the race since Toyota suffered a double retirement in the 10th hour of the race, leaving the German marque with a commanding 13-lap lead at the front of proceedings.

However rounding Tertre Rouge the leading car reported a loss of oil pressure, leaving engineers to ask Lotterer to turn off the Porsche’s engine.

It saw the race leader limp around the circuit at less than 30kph, the team pleading with its driver to bring the car home extremely slowly before it finally ground to a halt after the second chicane on Mulsanne Straight.

With trouble having struck every other LMP1 car in the race, it promoted the #38 Oreca-Gibson, the leading LMP2 runner, into the effective race leader.

Track workers pushed the #1 car clear of the circuit, though race control confirmed it would be allowed to rejoin the race should Lotterer be able to get the car restarted.

A spokesman for the team was less than optimistic about its chances after Lotterer climbed from the stricken car.

“We had to switch off the engine to bring it back for safety reasons,” the Porsche spokesman said.

“It’s very tough for the drivers and the crew. they did a great job in this car, now we switch focus to the other car. We have to see how that ends.”

The team’s focus then switched to its sole remaining car, with Brendan Hartley now in a race against time to make up the ground to the new race leader.

A charge from the #2 Porsche saw Hartley making significant inroads, clawing its way back to fifth having spent over an hour in the garage early in the race with a hybrid drive problem.

Hartley trailed the leading LMP2 entry by three laps but was closing at some eight seconds a lap, making for a dramatic dash to the flag for the sole running Porsche in its quest for victory.

“I think if everything runs normal we can run for P2, but we see what happens. With what has happened in the last 21 hours, anything can happen!”