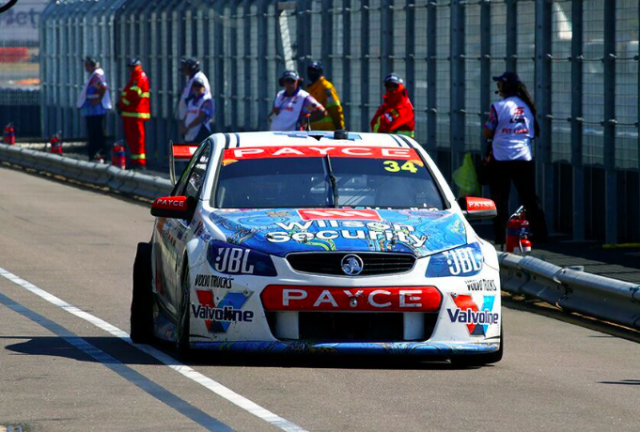 James Moffat was left to rue a costly tyre failure that robbed him a likely top 10 finish in Race 12 at the CrownBet Darwin Triple Crown.

The Garry Rogers Motorsport driver was challenging for a top five when his right rear tyre failed with 12 laps remaining of the 200km heat.

Running in eighth on the back of a train of cars fighting for fourth, Moffat was able to bring the car back to the pits before going on to finish in 25th spot.

Moffat was shocked by the sudden failure which brought a cruel end to a promising day after qualifying third in the Top 10 Shootout.

“There was no warning so it was disappointing, and there is not much you can do about it when it happens like that,” Moffat, who turned 33 today, told Speedcafe.com.

“We ran the same camber as yesterday. We did a pretty long stint on the tyres and there was no issue.

“It (the race) was looking ok. The middle stint of the race wasn’t great for us as we came out in traffic.

“Our car is really strong in clean air, but tucked up behind other cars we lose performance, so we need to look into that.

“Obviously everybody will be struggling with that, but our car seems to struggle a bit more.”

While frustrated at being unable to back up his ninth from Saturday’s race, Moffat believes there are plenty of positives to take from the weekend.

He feels an opportunity to run with the top teams has offered an insight into areas of improvement for the GRM package.

“There are plenty of positives,” he added.

“I feel like we have been quick all weekend. Qualifying this morning was great and to back that up in the Top 10 Shootout was even better.

“I still think our race performance was pretty good especially yesterday coming from the back of the grid, after I stalled, to ninth.

“When you are up with the bigger teams you can see what they are doing differently. We will keep chipping away at it.”

Next Story No friction in DJRTP team-mates title battle