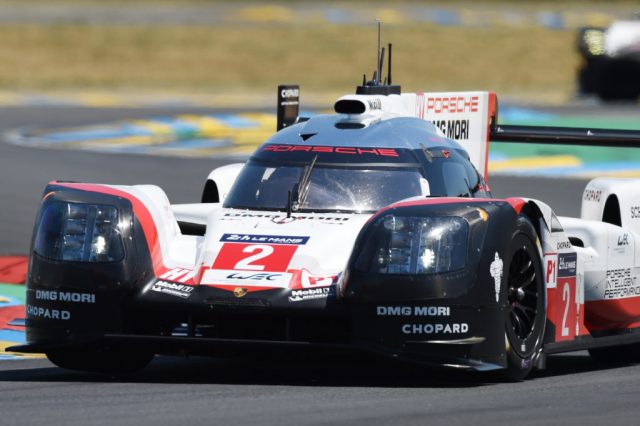 Porsche sealed an unlikely victory at the Le Mans 24 Hours with a last to first recovery drive which saw it take control of the French classic with just an hour left in the race.

It ended a frantic chase back through the field for the #2 Porsche 919 Hybrid, which suffered a front axle drive problem on Saturday afternoon and lost two hours in the garage.

Once back out on track the car, driven by Timo Bernhard and New Zealand duo Brendon Hartley and Earl Bamber, languished more than ten laps adrift of the race leader, and eight laps off the leading LMP2 entry which dramatically became the outright race leader with four hours of the race remaining.

Having taken over from the troubled Toyota squad, the #1 Porsche hit trouble when Andre Lotterer lost oil pressure in the #1 car and was forced out of the race.

It was the last in a sequence of LMP1 retirements, which started on the opening lap with the ByKolles car picking up damage that would ultimately prove terminal.

Toyota dominated the early stages, leading every lap of the race for the first ten hours before the #7 car inexplicably suffered an electrical issue.

It saw Kamui Kobayashi grind to a halt in the Porsche Curves, while just minutes later the #9 Toyota was also a retirement after suffering a fuel cut in the first corner.

Earlier, the #8 Toyota had suffered a front axle hybrid drive fault and lost more than an hour in the garage, much like Porsche had endured with the #2 entry.

Through the drama, the #1 Porsche inherited an 11-lap lead over the leading LMP2 contender, only for it too to stop out on the circuit after 20 hours of competition.

The race lead then fell to the #38 LMP2 Oreca-Gibson driven by Ho-Pin Tung, Thomas Laurent and Oliver Jarvis, the first time in the Le Mans’ history that an LMP2 car had led the race outright, though it soon came under intense pressure from the #2 Porsche.

The pass for the lead was made by Bernhard with 66 minutes left on the clock, Porsche going on to enjoy a trouble-free run to the flag to claim its 19th Le Mans 24 Hour victory.

Aussie James Allen escaped an off in the late stages to bring the GRAFF Oreca-Gibson home seventh overall, and sixth in class, with co-drivers Franck Matelli and Richard Bradley.

Scott Dixon, Ryan Briscoe and Richard Westbrook never had the pace in the #66 Ford GT to challenge for honours in GTE-Pro, which at times boasted as many of ten cars in contention through the middle part of the race.

That number dwindled to just two in the final laps, the #97 Aston Martin duelling with the #63 Corvette in a ferocious battle for class honours.

The squabble was only resolved at the start of the final lap when the Aston Martin capitalised on a slow puncture for Jordan Taylor in the Corvette, who was then forced to limp the car around for the final lap, dropping behind Harry Ticknell in the #67 Ford GT to end the race third in class.

Ferrari emerged as the dominant force in GTE-Am with the Italian marque claiming all three podium places, the #84 JMW Motorsport 488 GTE a lap clear of the #55 and two laps ahead of the #62 entry.

Ben Barker and Michael Wainwright combined to help Australian Nick Foster to tenth in class, the Porsche 911 RSR five laps off the back of the winning Ferrari.