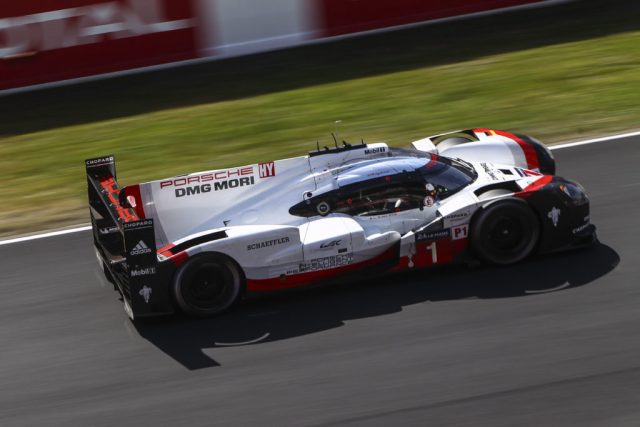 Porsche holds the lead at half distance in the Le Mans 24 Hours with LMP2 cars holding down second and third after Toyota suffered two retirements in rapid succession.

Having led for much of the race, the #7 Toyota failed to accelerate back to racing speed as the first safety car was withdrawn in the tenth hour of the race.

Kamui Kobayashi tried desperately to limp the car back to the garage, stopping on track several times before the car finally cried enough with electrical problems in the Porsche Curves.

No sooner had Kobayashi climbed from the #7, which had led almost every lap of the race to that point, than the #9 Toyota found itself bouncing through the gravel after a sudden fuel cut resulted in contact with the #25 Manor at the first corner.

Running second at the time, Nicholas Lapierre tried to drag the car back to the garage he too was forced to admit defeat, leaving Toyota reeling as the squad lost two of its three cars within minutes.

It left the Japanese manufacturer with just one car in the race, though hybrid drive problems had seen the #8 entry lose nearly two hours in the garage and languished some 28 laps off the leader.

The second Porsche had similar issues earlier in the race, meaning the two Rebellion run Oreca-Nissan LMP2 cars held down second and third outright at the 12-hour marker.

Such was the decimation of the LMP1 class that the #2 Porsche was 18 laps down on the race leader, but remained second in class while third in LMP1 was the #8 Toyota was outside the top 50 outright.

Triggering the action was a spin from Olivier Pla in the #66 Ford GT, the Frenchman losing control at Indianapolis, depositing a significant amount of gravel on the road and forcing officials to deploy the safety car for the first time after almost ten hours of racing.

Australian James Allen worked his way into sixth overall and fifth in LMP2 class in the #40 GRAF Oreca-Gibson, while James Winslow in the #39 sister car sat 13th in class.

In GTE-Pro, Richie Stanaway’s #95 Aston Martin led narrowly from the #97 Aston Martin with the #51 AF Corse Ferrari 488 GTE tucked up behind them in third.

Further down the order, Scott Dixon, Ryan Briscoe and Richard Westbrook ran 47th overall in the second of the Ford GTs while heading GTE-Am was the #84 Ferrari 488 GTE as Australian Nick Foster ran tenth in class in the Gulf Racing Porsche 911 RSR.