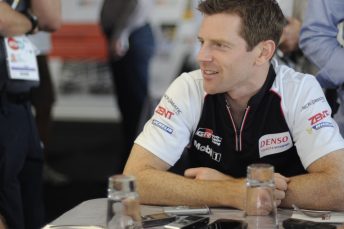 Toyota driver Anthony Davidson admits it feels like he and Toyota are dealing with a Le Mans 24 Hours curse, despite qualifying first and second for the 2017 race.

The manufacturer has missed out on a number of likely Le Mans wins, most dramatically last year when Davidson’s Toyota hit trouble with just six minutes remaining, on course for a comfortable win.

Davidson was also in Peugeot’s line-up in 2010, when it had a clear pace advantage over Audi, but ultimately failed to get any of its three works cars home.

Asked about a possible curse, Davidson said: “It does feel like that – and for me it’s not just with this car.

“You’ve just got to try and remain emotionless through the whole thing, but it’s hard.

“I’m more prepared for failure than success but maybe that’s just me being pessimistic.”

Davidson said it was only in the final minutes that he started to get excited about potentially winning 12 months ago.

“I only put my suit on for the podium with 10 minutes to go last year… it was like I had a premonition,” he said.

Despite Toyota claiming pole with a record-breaking lap from Kamui Kobayashi in the sister #7 car, Davidson reckons Toyota will be far less dominant in the race.

Toyota has downplayed the time Kobayashi produced because of the lack of traffic he encountered during his lap and the track having optimum grip levels after support-race action.

The closest Porsche qualified 2.468 seconds slower than Kobayashi, and 2015 winner Nick Tandy estimates the real gap could be around one second.

Tandy believes the difference between Porsche and Toyota could be much smaller in hot conditions.

“I’m expecting Porsche to be much closer but we probably have got the advantage,” said Davidson, who will start second.