Steven Johnson qualified fastest in his Ford Mustang and will start from pole for Race 2 but it was Jim Richards and Cameron Mason who shared the front row for the first race under the partial reverse grid format.

Richards got the best getaway in his Falcon Sprint while Garwood senior moved up to second position in his Ford Capri.

Garwood then dragged past the touring car legend into Lap 2 and gradually drove away to a 2.4s victory, his first in the series.

Johnson drove from the very back of the 22-car field to finish ninth.

Wayne Mercer had been running fourth when he spun his XY Falcon at Turn 5 on Lap 7.

John Bowe was the only retirement with a transmission failure sidelining his Holden Torana early in the piece.

The two-time Bathurst 1000 winner will share the front row with Johnson for the first of tomorrow’s two races from 1025 ACST (1055 AEST). 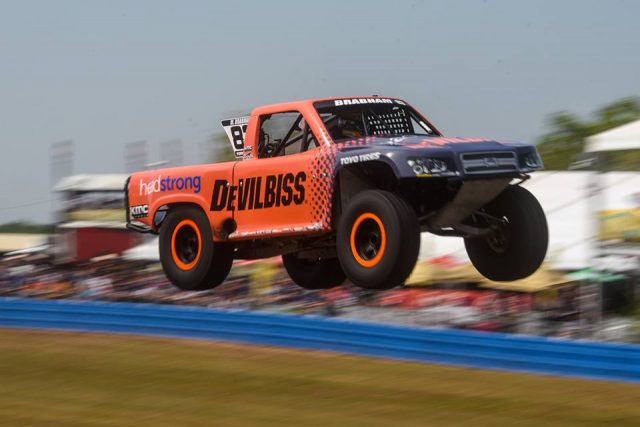 Matthew Brabham has extended his points lead with victory in the second race of the weekend at Hidden Valley.

Greg Gartner and Bill Hynes shared the front row and it was the former who led the eight-truck field away.

Brabham, however, was on a charge early on and quickly moved up to second with a series of bold moves before passing Hynes for the lead at the start of Lap 3.

Gavin Harlien was soon on the tail of #83, but braked too late into Turn 1 and took Brabham off with him at the start of Lap 6.

Paul Morris assumed the lead, but only for a lap as Harlien made a great run off the pit entry chicane to set up a move at the end of the main straight and this time successfully take first position.

While Harlien ran completely off the road exiting the corner, he held the place and instead held up Morris such that Brabham could dive underneath ‘The Dude’ at Turn 5. Paul Morris on his side pic: Fox Sports

Brabham reclaimed the lead at Turn 1 following the second of two Competition Cautions at the start of Lap 9 and Robby Gordon moved past Morris for third later on that lap.

The race then came to a halt when Morris slid into the wall at the pit entry chicane and turned his truck onto its side when he snagged the tyre wall while attempting to drive away.

#67 was allowed to catch the rear of the train for the final two laps, during which Gordon took over second before Harlien out-dragged the former NASCAR driver to the finish line.

The final result was Brabham with the with, ahead of Harlien, Gordon, Jeff Hoffman, Craig Dontas, Gartner, Morris, and Hynes.

Earlier, Gordon had won a full-field, points-paying Shootout which helped to set the grid for that race.

Adam Uebergang has won each of the first two races in Improved Production.

Uebergang won comfortably in Race 1 before dominating Race 2, putting approximately a second per lap on the field on most laps in the Uebergang Transport entry.

Tim Playford, also in the Over 2L class, ran second in both races, while Super2 full-timer Bryce Fullwood was first in Commodore cup in each heat with outright results of sixth and then third.

Peter Cusato topped Under 2L on both occasions (eighth, sixth outright), while Joel Heinrich and Brett Osborn shared the spoils in HQ Holdens.