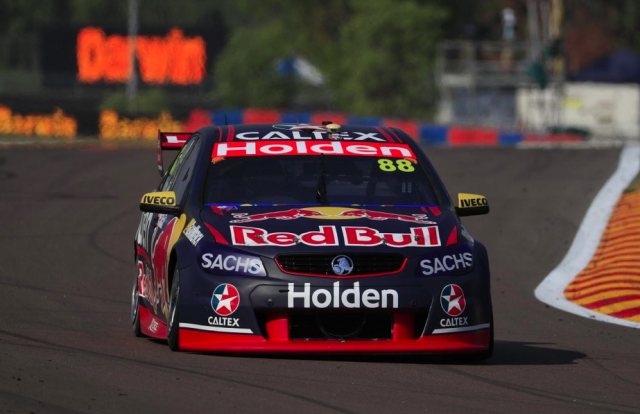 The six-time champion managed to clock an impressive 1:06.03s effort to move to the head of the times as the 45 minute reached its climax.

Whincup was fast out of the blocks having headed the times before his initial benchmark was surpassed by Erebus Motorsport’s David Reynolds.

A flurry of fast times shook up the order in the final five minutes this saw McLaughlin light up the timing screens as he surged to the top.

His time was then threatened by Craig Lowndes who clocked a lap just 0.0091s shy of the Kiwi.

However, Whincup’s final showing proved enough to end the session fastest with a 0.03s ahead of McLaughlin, while Lowndes was demoted to third.

“The car’s good, we were obviously changing it up heaps,” said Whincup.

“We can’t just sit on our hands and cruise around so definitely car’s better, made an improvement after the test day, hopefully that continues on for the rest of the weekend but there was plenty of time for everyone. If we can find time, I’m sure everyone can.”

McLaughlin seemed to concur, suggesting that he drove beneath the potential of his Shell V-Power Falcon.

“The car’s nice, I just over-drove it just trying to find the limit in areas and I probably over-stepped the mark,” said McLaughlin.

“(That’s) what practice is all about and we’ll push into tomorrow and learn a lot.

“The car’s been fantastic all day in race trim and qual trim so just looking forward to tomorrow, really. I just want to get racing.”

Reynolds, who was fastest at the halfway point, dropped to fifth after Mobil 1 HSV Racing’s Scott Pye fired in a lap good enough to rise to fourth in the final moments.

Pye had an engine drama during the session prior to his final green tyre run.

Reigning champion Shane van Gisbergen and Will Davison rounded out the top 10.

Jason Bright finished the session in 17th after Prodrive successfully completed a repair on his Falcon following a crash in the opening session.