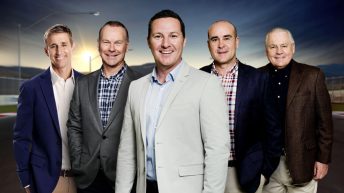 The future broadcast landscape for Australian motorsport has been thrown into turmoil with the announcement that Network Ten has been placed into voluntary administration.

The decision comes as a result of financing concerns amid the impending expiry of a $200million debt facility in December.

Ten Network Holdings was placed in a trading halt on Tuesday after major shareholders indicated that they would not continue to guarantee the company’s debt.

It announced to the ASX a short time ago that advisory and investment firm Korda Mentha has been appointed as voluntary administrator, a move which is widely seen as a means of renegotiating onerous output deals with US studios.

Ten is currently the free-to-air (FTA) broadcaster of the Virgin Australia Supercars Championship, Formula 1, and MotoGP, in Australia, through a supply agreement with rights holder Fox Sports.

Today’s development means that Fox Sports would need to renegotiate the free-to-air element, which is a major factor for the sport’s major stakeholders, with either channels Seven or Nine in the event that Ten ceases operations.

The F1 arrangement which runs to the end of 2019 similarly sees Ten air 10 races live and the remainder in extended highlights form on the following Monday night.

Under the MotoGP deal, renewed in late-2016, the network will broadcast all premier class races live (usually on One) in 2017 and 2018, as well as extended coverage of the Australian Grand Prix.

Given the current position of Network Ten, it is likely that all current programming for the 2017 seasons would remain in place, but major re-positioning may be required for 2018.

“The administrators have advised the Company that they will work closely with management, employees, suppliers and content partners while they undertake a financial and operational assessment of the business,” read Ten’s statement in part.

“During this period, the Administrators intend to continue operations as much as possible on a business as usual basis.”

While The Australian earlier reported speculation that a private equity firm might look to buy Ten, News Corp has also previously been mooted as a purchaser.

The developments come amid Archer Capital’s recent attempts to offload their ownership of Supercars.

Ten Network Holdings Limited (ASX: TEN) (“TEN” or “the Company”) announces that Mr Mark Korda, Ms Jennifer Nettleton and Mr Jarrod Villani of Korda Mentha have been appointed as voluntary administrators of the Company and each of its subsidiaries listed in the attached schedule (together the “Ten Group”) by the Ten Group Directors.

This decision follows correspondence received from Illyria and Birketu over the weekend which left the Directors with no choice but to appoint administrators.

This decision comes despite the Ten Group making significant progress to realise the potential sources of improvements to future earnings identified in the Company’s Directors’ Report contained in its Half Year Financial results announcement, that is:

In relation to the transformation process, the Company has identified initiatives that are expected to have a positive impact on earnings in the order of at least $50 million in FY18 and potentially more than $80 million per annum by FY19.

In relation to the renegotiation of programming contracts, the Company has agreed in principle the vast majority of the commercial terms of replacement volume content supply agreements with its US studio partners, Fox and CBS, although final terms have not yet been formally agreed. The effect of these replacement content agreements, if finalised and implemented, would be to reduce by approximately 50% the Group’s future liabilities for US content, while still allowing TEN access to the best productions of those studios over the medium term.

In relation to the reduction in Federal Government imposed licence fees, TEN anticipates that after the changes to regulations anticipated to be tabled in Parliament tomorrow pass through the Parliamentary process, the reduction in licence costs for TEN in FY17 will be in the order of $22 million and, in FY18, $12 million.

The administrators have advised the Company that they will work closely with management, employees, suppliers and content partners while they undertake a financial and operational assessment of the business. During this period, the Administrators intend to continue operations as much as possible on a business as usual basis.

The Directors of TEN regret very much that these circumstances have come to pass. They wish to take this opportunity to thank all TEN employees and contractors for their commitment and enthusiasm for TEN’s programs and business. In particular, they would like to express their sincere gratitude, respect and admiration for TEN’s leadership team, who have achieved everything the Board has asked them to do over the past few years in very challenging circumstances. They wish TEN and its management TEN all success in the future as the Administrators look to the potential sale or recapitalisation of the business.

Speedcafe.com is seeking further comment from Ten and Supercars.