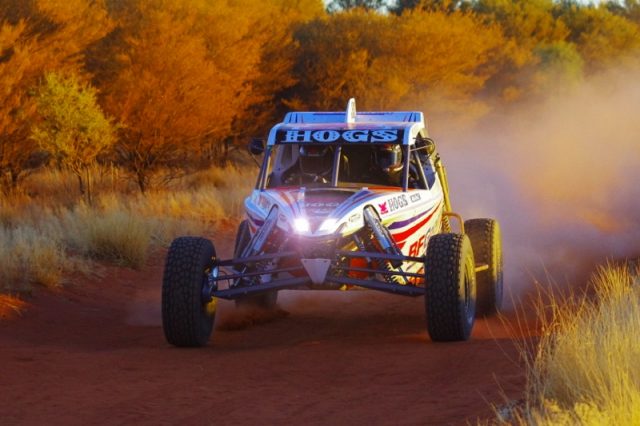 Victorians Shannon and Ian Rentsch have won the Tatts Finke Desert Race for a fifth time after a devastating mechanical failure for Travis Robinson.

The son and father pairing returned to Alice Springs in an aggregate time of 3:42:40.9s in their #33 Jimco Nissan 3500cc, having placed second at the overnight stop in Finke.

Travis Robinson/Trent Anthony (#13 Jimco OBR Nissan 3500cc) set the fastest on the 226km journey to Finke, and were still leading when they suffered a power steering failure after the Rodinga checkpoint, approximately 90km from the finish. 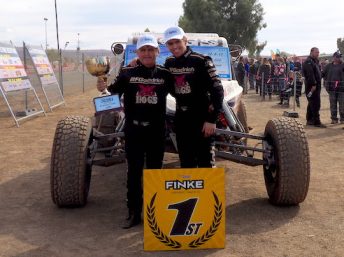 The victorious father and son combination

“I knew it was going to be tough, I actually didn’t think we would catch up to Trav,” said Shannon Rentch.

“The car was working really well and I just tried to push really hard when we had a clear track in front of us.

“We got within about 30 seconds of him and then at about the 100km mark out of Alice Springs he was pulled up beside the road.”

“(The Finke is) the biggest race for us; everyone wants to win it.

“It’s the Bathurst of off-road, hard on man and machine and it’s just unbelievable to get the job done.”

Travis Robinson continues to lead the BFGoodrich CAMS Australian Off Road Championship, for which the Finke forms Round 2, with the final round at Victoria’s Rainbow Enduro on August 4-6.

The Bikes field is expected to start filing into Alice Springs from 1400 ACST.