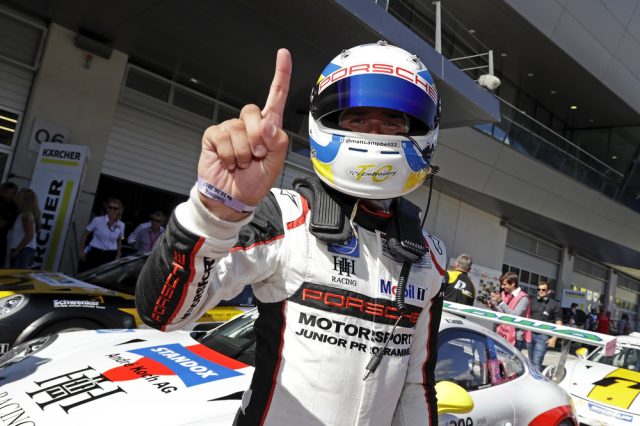 Matt Campbell – number one in Austria

Defending Carrera Cup Australia champion Matt Campbell has taken his first European victory by winning the opening race of the Carrera Cup Deutschland at the Red Bull Ring in Austria.

Campbell, who is competing fulltime in the Porsche Supercar Series alongside Formula One events in Europe this year, was entered in the German Carrera Cup event to gain experience of the track. The Red Bull Ring is the next stop for the Supercup in July.

The result can not be underestimated in a field of 31 cars, including all the top drivers from the Supercup.

After jetting-in from Supercar testing with Triple Eight Race Engineering at Queensland Raceway earlier in the week, Campbell was 15th in practice as he familiarised himself with the Spielberg venue.

He quickly got into the groove during qualifying, setting the second fastest time to Carrera Cup Deutschland regular Larry Ten Voorde.

Racing for Fach Auto Tech, Campbell got a good start and sat in second during the opening two laps, holding off plenty of two and three-wide attacks from behind.

On the third lap Ten Voorde locked a brake and ran wide and that was all the incentive that Campbell needed. The Queenslander quickly pulled away to a five-second lead.

A late race incident between Florian Latorre and Christian Englehart brought out the Safety Car. With the field bunched on the re-start with just one lap remaining, Campbell kept a cool head to again hold-off Ten Voorde through to the finish.

“My first win in the Carrera Cup feels fantastic. Because of the late safety car phase my advantage suddenly disappeared, but I didn’t let it throw me off balance,” said Campbell.

Campbell will look to round-out the weekend sweep in Sunday’s second race where he will start off pole thanks to his performance in the second qualifying session.