Paddon heads the field in Italy

Paddon heads the field in Italy 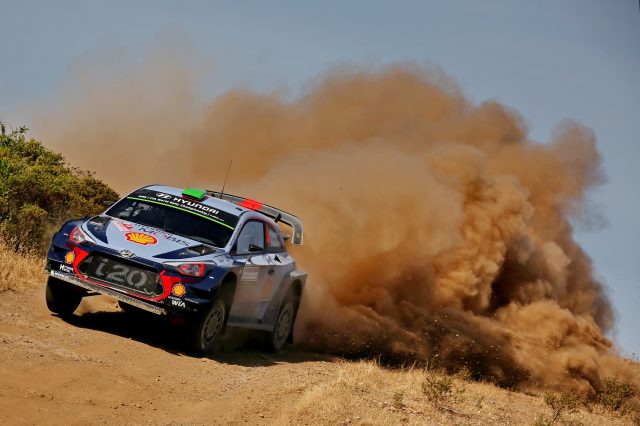 Hayden Paddon out front in Italy

Hayden Paddon has put together a solid day to lead Rally Italia Sardegna as the top five is separated by just under 15 seconds.

After a range of issues throughout the first half of the year the Kiwi led by 8.2sec after a gruelling first full day in scorching temperatures on rocky roads.

Four different drivers led held the lead before Paddon secured top spot in the afternoon. He overcame a broken damper in his Hyundai i20 to head a tightly-clustered pack of four pursuers.

The Mediterranean island’s roads were covered in slippery gravel and Paddon targeted an error-free day to earn a prime start position on clean tracks for tomorrow’s longest leg.

“We approached today with a specific plan, and we didn’t deviate from that,” said Paddon.

“We know you can’t win this rally on the first day, so we just wanted to feel comfortable. The car felt good and we wanted to continue our positive morning into the afternoon.

“Unfortunately, we picked up front-left damper damage in SS7, which changed the balance of the car; things didn’t feel as good.

“Our focus today was on securing a good road position for tomorrow, so it’s mission accomplished from that point of view.

“I enjoy tomorrow’s stages a lot but we know it’s a tough, unforgiving rally. It’s nice to be leading this evening but we’re not getting carried away.”

Hyundai team-mate Thierry Neuville sits second after he climbed back-up the leader board, despite facing the worst of the slippery conditions. An overshoot and two punctures, which he survived despite carrying only one spare wheel, cost time.

Ott Tanak was 1.3sec behind in a Ford Fiesta, the Estonian’s only issues being a heavy landing and a half-spin. He was 0.3sec ahead of Jari-Matti Latvala’s Toyota Yaris, who also fared well from a difficult start position.

Mads Ostberg was third for much of the day in a Fiesta. The Norwegian’s gamble of mixing soft and hard compound Michelin tyres didn’t pay off in temperatures that topped 30°C and he dropped to fifth.

Sixth is Juho Hanninen, who led briefly and was second until hitting a bank in the final speed test. The impact cracked a radiator pipe and he faced a nerve-wracking journey to the overnight halt in Alghero with water leaking from the engine of his Yaris.

Road opener and championship leader Sebastien Ogier struggled for grip all day in his Fiesta. The frustrated Frenchman was seventh, 41.0sec off the lead. He will be one to watch on the second leg as he aims to fight back.

Esapekka Lappi was eighth in another Yaris. The Finn lost second gear this morning and broke a damper in the afternoon, but reeled off a string of three stage victories – his first at WRC level.

Andreas Mikkelsen returned to the series in a Citroen C3 for the first time since last season was ninth. He lost time after stalling six times this afternoon. Eric Camilli completed the leader board in a Fiesta R5.

There were several high-profile victims. Kris Meeke again rolled his C3 out of the lead, team-mate Craig Breen stopped with an oil leak in his gearbox and Elfyn Evans retired after crashing his Ford Fiesta. Turbo problems cost Dani Sordo more than 11 minutes.

Saturday’s leg is the longest of the weekend. Competitors face two identical loops of stages covering 143.16km, placing high demands on tyre wear. Each loop ends with the Monte Lerno stage and the famous Micky’s Jump.