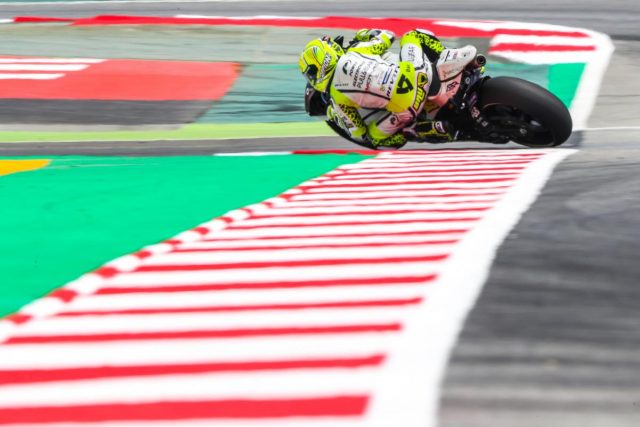 Alvaro Bautista negotiates the new chicane, which he crashed at during practice; MotoGP will revert to the F1 version seen in the background

The rest of the Catalan MotoGP weekend will be run on the Formula 1 chicane after Friday practice highlighted safety issues with the circuit modifications.

A new chicane, which was similar in profile to the F1 version, had been constructed over the northern winter in order to introduce more run-off for motorcycles in front of a wall.

MotoGP had originally switched to the F1 layout on the Saturday of the 2016 Catalunya race weekend after the death of Moto2 rider Luis Salom during practice.

However, following Friday practice, the Safety Commission has decided to switch back to that F1 chicane after riders expressed concerns about the safety of the newly built chicane. 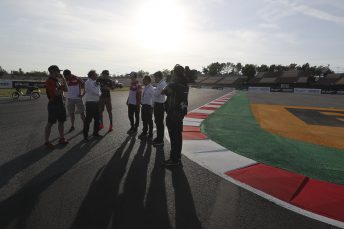 MotoGP Safety Advisor Loris Capirossi says that the likelihood of a crashed bike remaining on the circuit and in harm’s way was the reason for the change.

“In the Safety Commission the riders complained a little about the new layout; they said the work wasn’t done in the right way and there were a lot of bumps,” explained Capirossi.

“That’s why the riders decided to go back to the layout from last year.

“We saw during practice today (Friday) a lot of crashes too where the bike remained on the track and at the exit of the corner, and that’s very dangerous.

“We have experience from last year of the old chicane and we didn’t have any crashes like we did today.

“That’s why the riders requested it. In terms of crashes, the old one is better.”

Jack Miller had been black flagged for mistakenly continuing to use the F1 chicane during Free Practice 1, but both the Australian rider and his Marc VDS Honda team saw the lighter side of the incident, and subsequent change to the track.

Okay @jackmilleraus, remember this morning we told you to turn left 100 metres earlier? Well you can ignore what we said

Marc Marquez was fastest in both session, the first run on a drying track after overnight rain in Barcelona, despite losing his best FP2 time due to failure to fully observe a local yellow flag.

A further two practice sessions will be held tonight before qualifying from 2210 AEST.