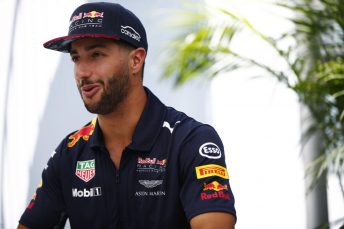 Daniel Ricciardo was forced to sit out much of Practice 2 after suffering engine issues ahead of this weekend’s Canadian Grand Prix.

Initially thought to be nothing more than a cracked exhaust, investigations during the session quickly revealed the problem was more serious.

“Better today than Saturday or Sunday,” Ricciardo said after practice.

“It is what it is. We had a little bit of a problem this morning and then something with the engine at the end.”

The Red Bull driver managed 23 laps in the earlier session, though struggled through to set just the ninth best time – more than 1.5s off Lewis Hamilton’s best time of the session.

Ricciardo’s progress was then halted after a mere nine nine laps in the second session with his first engine failure of the season.

“We didn’t get many flying laps today but it is okay, I have been to this track before so tomorrow I will learn from Max’s runs today,” Ricciardo reasoned.

“He looked pretty competitive at the end there he did a low 13, so that was not bad. Hopefully it is representative and I can join the battle tomorrow.”

However Verstsappen too struck trouble, the Dutchman grinding to a halt out on track in the final minutes of the session.

The team is investigating the failure, which appeared to strike the transmission of the car which suddenly lost drive exiting Turn 7.

“I don’t know what it was exactly, we need to investigate,” explained Verstappen.

“Before that it was quite a positive session. I thought we were quite close to the top four on this track which is normally not a favourite. We can be quite pleased with that.”

Verstappen ended the day with the fifth fastest time, just under half a second of Kimi Raikkonen’s fastest time of the day.