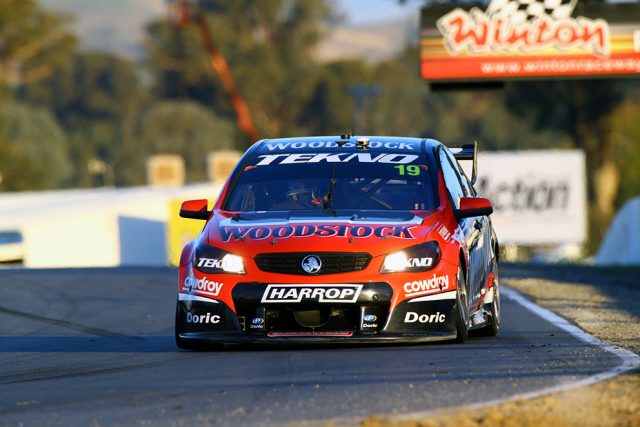 Will Davison believes Tekno Autosports has made progress since Perth

Will Davison believes a new engineering approach is beginning to reap rewards at Tekno Autosports.

An engineering reshuffle heading into 2017 has brought with it an all-new approach, which Davison suggests is only now beginning to show its potential.

“We’ve kind of shifted the whole philosophy of the car and changed the setup quite a lot,” Davison told Speedcafe.com.

“The cars are very complex, a lot of teams engineer the cars in different ways.

“There’s merit in many different philosophies out there but unfortunately you can’t have every philosophy.

“That’s where people get confused and constantly try and re-engineer because in theory there’s always something that could be better.”

Davison is this year engineered by Campbell Little, who joined the team in February after Geoff Slater opted to leave the squad at the end of 2016.

According to Davison, the relationship with Little is now beginning to gel, with Little’s approach promising to deliver more consistent performances over the course of the campaign.

“I think now it’s all starting to make sense,” he conceded.

“We were still running a relatively old base philosophy last year, and things move forward with Triple 8 cars, and we were sort of still ‘let’s keep it simple’.

“It certainly took a few events just to get all our ducks in a row and understand what we had, because it was foreign to me and I don’t think we were tuning it correctly.”

A test day on Tuesday at Queensland Raceway was also perfectly timed for the team, which used the opportunity to further refine its base setup and test a number of development parts.

“For sure there were a couple of things that we definitely found that were better for us,” revealed Davison.

“We had a couple of new little things in the car that are set and forget, so to speak.

“I think the last couple of events we’re getting back to where we should be. At the end of the day, we know what we’re capable of.

“We’ve just got to keep it smart. I’ve taken a lot of confidence out of Perth and Winton, where the car felt good and it was quite quick.”

The test also saw the team move more in line with the engineering approach used at Triple Eight, leaving Davison hopeful he’ll be able to compete with Tekno’s sister team, and class leaders DJR Team Penske, at the front of the field.

“Although we’re not the same as the Triple Eight cars, we’re hopefully much more in line with the way they run their cars.

“Those guys are very quick at the moment but we know if we can get our car to its optimum every weekend we should be able to trouble them.

“There’s no hiding behind the fact that as a customer trying to hunt down the likes of those two teams is tough, but it’s not impossible.”

It contrasts sharply with the opening three rounds of the year, which netted a best of ninth at Phillip Island and saw Davison hospitalised following the 12-car pileup at Symmons Plains.

“It was a really tough start to the year for us, but it’s certainly all upbeat and positive now,” he admitted.

“It’s been an awesome couple of races again to build on.

“A couple of missed opportunities I think but we’ll tidy up a few of the things that went wrong there and make sure we get on the podium at this next block of races.

“We feel like we’re starting to get our car into a window, and I think going into this next block of races we can consistently be up there in the top five – and when you’re there anything can happen.”