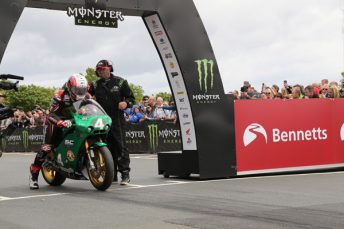 Michael Rutter has taken an all-the-way victory in the Lightweight TT Race at the Isle of Man TT.

Rutter set a new lap record on his way to an 8.8s victory over Martin Jessopp, giving Italian manufacturer Paton its first win in the Isle of Man TT in the process.

The first lap of the 37.7mi (60.7km) circuit was a tight affair with Rutter holding a narrow advantage over team-mate Stefano Bonetti throughout.

Jessopp (Kawasaki) took up second position on the run to Glen Helen on Lap 2, with Bonetti by then locked in combat with Peter Hickman (Kawasaki) and James Cowton (Kawasaki).

Jessopp trailed by only 2.8s by the time the pair reached Glen Helen on Lap 3, but that was as close as he got for the rest of the four-lap race as Rutter responded to take his first win at the TT since 2013 and his fifth in total.

Hickman finished comfortably clear of fourth-placed Ivan Lintin (Kawasaki), who ran as high as third but lost time and the position when he made a helmet change at his pit stop.

Bonetti retired on Lap 2 at Creg-ny-Baa.

Earlier in the Superstock race, Ian Hutchinson (BMW) dominated the four-lap encounter for his second win of the race week, while Hickman (BMW) and Dan Kneen (BMW) rounded out the podium.

Hickman now has four podiums from as many starts at the 2017 Isle of Man TT.