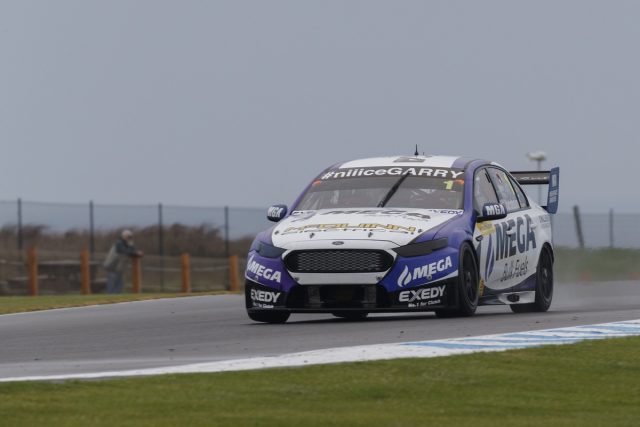 Garry Jacobson says that he can still defend his Dunlop Super2 Series title despite a tough start to the 2017 season.

Jacobson, currently preparing for a maiden Pirtek Enduro Cup campaign at Prodrive Racing Australia, remained in the second tier of Supercars with the Ford squad after winning the series in 2016.

The 25-year-old sits seventh in the series, 295 points away from leader Paul Dumbrell, having most recently suffered a tyre failure while threatening to take the lead in Race 2 at Phillip Island.

That incident came after being stripped of pole in Round 2 at Symmons Plains due to a red flag infringement, putting Jacobson to the rear of the grid for Race 1.

In that race, he had an off after contact with Renee Gracie while trying to climb through the field; in Race 2, he was issued a post-race penalty for turning Andrew Jones around; and in Race 4, he was on the receiving end when Kurt Kostecki spun the #1 Falcon, but still managing to salvage fifth in that heat.

Despite the troubled start, Jacobson says the raw pace he has displayed since an uncompetitive opening round in Adelaide has actually made his season to date a positive experience, and remains bullish about his Super2 campaign.

“I wouldn’t call it frustrating,” he told Speedcafe.com when asked about a less than ideal start to the year.

“While the situation at Symmons Plains getting sent to the rear of the field and the tyre failing at Phillip Island were setbacks, and I’m not going to sugar-coat that, we’re still quite upbeat about our qualifying results.

“Clipsal was the first round and you get an idea of how the car feels straight out of the box because you don’t really get much testing going into the first round.

“We’ve come back to Symmons Plains and got a pole position and Phillip Island we got a second there (in qualifying), so we’ve got two front row results and that’s probably more consistent than anybody else in terms of being up the front and having speed.

“I think the team understands the situation at hand and they know that it was sort of out of my control a bit with what’s going on in the last two rounds.

“We’ve certainly shown that we’re still contenders and that’s what they’re happy about.

Jacobson is also preparing for his debut in the Virgin Australia Supercars Championship as Jason Bright’s Pirtek Enduro Cup co-driver, having been overlooked in 2016 when then-Super2 team-mate Jack Le Brocq was paired with Cameron Waters.

Jacobson says the opportunity demonstrates that his career has not been jeopardised by spending another year in Super2, after being close to taking up a Championship series drive for 2017.

“For me to be able to compete in the Championship in main game would be a dream come true,” said the Victorian.

“It’s just about being in the right seat at the right time and the timing wasn’t right to go up this year.

“I certainly think that after showing some consistency through this year and last year, next year you never know what could happen.

“Competing in the Super2 Series this year, in my opinion, is not a setback.

“We’re still in a good team and what I’m focusing on is that I’m in the Super2 championship with Prodrive, which is a tick in the box, but I’m actually racing in the main game for the first time ever.

“I’ve never had a co-driver role before and Tim Edwards has rewarded my efforts from last year to put me in with Jason Bright, and I’m absolutely stoked to be able to represent Prodrive in the main game category.

“I’m pretty pleased about that and as of next year, we’ll just have to wait and see what seats are available when the time comes.”