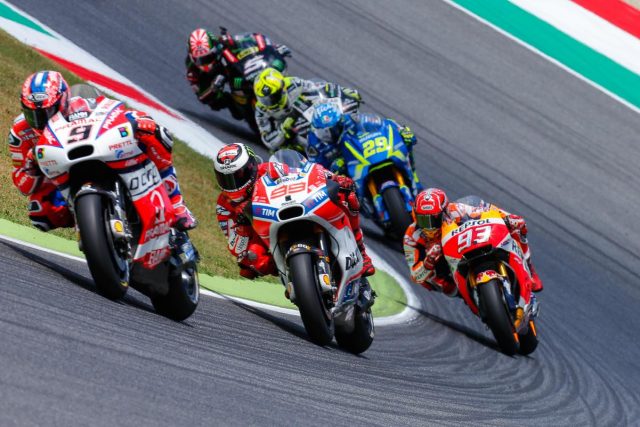 Jorge Lorenzo says that the Italian Grand Prix exposed the need to make further adjustments to his riding style in order to extract the most from his Ducati Desmosedici.

While Lorenzo briefly led Ducati’s home grand prix in Mugello, he faded to eighth by the finish.

On the other hand, factory team-mate Andrea Dovizioso took a famous victory as he became the first Italian to win for the Italian manufacturer in the Italian Grand Prix.

In addition, Danilo Petrucci took a first dry weather podium as he finished third on a Pramac Ducati, Alvaro Bautista finished fifth on an Aspar Ducati, and wildcard Michele Pirro finished ninth on a factory bike in his first start this year.

Tellingly, those five riders had the five highest top speeds, Lorenzo second among those, which was critical on Mugello’s 1.1km-long front straight.

Lorenzo is now six races into his Ducati contract after spending his first nine years in the premier class on a factory Yamaha.

The Spaniard conceded that while he was pleased to lead a race for Ducati for the first time as he battled with former team-mate Valentino Rossi on Laps 2 and 3, he has work to do in order to best utilise the fast yet difficult-to-ride Desmosedici.

“I had a good start and also the first two laps I led the race for the first time in my Ducati career, but then it was quite a so-so race for me,” said Lorenzo.

“(I had) slow pace, and I still don’t have the riding style that the bike wants to be competitive most of the time.

“We were not so far but we’re missing about half-a-second, especially in the middle of the corners; a lot of riders overtook me on the inside, which has never happened to me so clearly we are missing something.

“I said on Friday that the bike was ready to win and they won and finished very close with Petrucci.

“(They are) Riders who brake so hard, so late, they enter the corners with a lot of confidence, and they ride the logical way but it looks like it is the good way for this bike at the moment.

“We hope to change the bike for the future and adapt it more to my riding style, but until this happens I will have to do whatever it takes to be competitive like the hard brakers.”

Ducati has tested recently at both Mugello and the track which will host this weekend’s Catalan Grand Prix, the Circuit de Barcelona-Catalunya.

The 30-year-old says that a promising outing at the latter has given him greater confidence ahead of Round 7 of the world championship.

“At Montmelo (Barcelona), anything can happen,” Lorenzo suggested.

“In the test at Mugello I was slower than Michele and Andrea; much, much slower. During the weekend, I improved a little bit but obviously we’re missing something here.

“(At) Montmelo, I was the fastest Ducati over the two days, so anything can change and I think we can be a little more competitive.”

Lorenzo is currently seventh in the championship, 33 points behind second-placed Dovizioso.